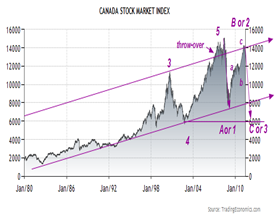 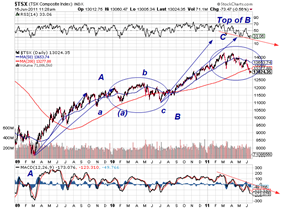 Looking at the TSE it looks to me that we have done a B with from the lows of March 2009. The trend-lines etc.etc. all seem to support that notion very well. However it still could be possible that we need to go one higher. Personally my (subjective) take on the matter is that we go down NOW, but EW does not definitively support that as, as al ways, there is a lot of ambiguity. Looking at the chart on the right it is clear that the B wave COULD be incomplete. Both patterns in the circles could be A-B-Cs with the C being a diagonal as shown below on the left; 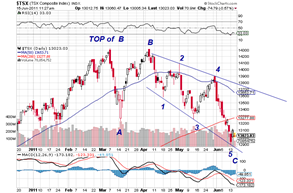 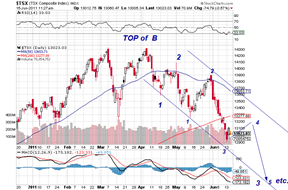 If this one applies we should go one higher even if the ultimate outlook does not change. If the one on the right, starting with a series of 1-2s , applies we are on the verge of dropping into a 3d wave and things will accelerate rapidly. Take your pick but I would go for the bear case when taking into account all other considerations, such as fundamentals, valuations, sentiment etc.etc.

Note that diagonals do not contain 5 wave legs (unless it is a type 2 pattern which arguable does not exist either) and consequently the count on the left is rather dubious. Also if we do go one higher both patterns within the circles would be similar and consequently there would be no alternation.