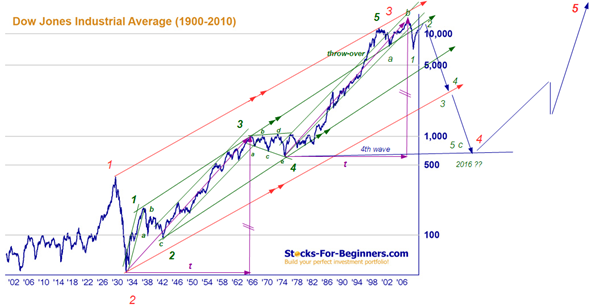 EW is about mass psychology , something that works almost subconsciously when large numbers of people interact. Consequently it could be rendered inoperative in the event a single party or small group takes over – as perhaps in the case of a over active Fed or the proverbial “plunge protection team”.  Not a frequent occurrence and otherwise entirely pragmatic, that is derived from the real world and totally devoid of assumptions, hypothesis and other such fancy academic stuff. Let’s assume it applies, still.

According to EW you go up 5 and down 3 and then simple repeat the sequence on a larger scale. The above chart shows a fairly clear 5 up from the depths of the great depression to 2000, 2007 and now 2011. Typically this entire sequence unfolds within a channel with well define boundaries (see green par. lines). A “throw-over” at the peak is normal and first happened during the tech-bubble. Normally there is alteration between waves 2 and 4; here wave 2 is a zig-zag (straight down, more or less) and 4 an expanding triangle (sideways). Alternation occurs often and everywhere, take for instance Volcker/Greenspan or Prohibition/smoking.  It happens often that wave 5 in the sequence travels the same distance as waves 1, 2 and 3 combined. On this semi-log scale chart not only is that precisely the case , but the time spent is also precisely equal , making wave 5 vector equal to 1.2 and 3.(see purple lines).

Geopolitically this 2 generation period from 1930 to now covers a unique period. We went from WW2 to the fall of the Russian Empire, from no cars to 2 cars in every driveway,from a TV in every room to home computers that have more power than the old IBM mainframes, live expectancy has increased by roughly 20-years, we walked on the moon etc.etc. This kind of progress will not stop but it is hard to imagine another 70 year period with so much change. Typically ages of enlightenment are followed by darker days. In short it seems at least plausible that progress will be a little less robust as we try to solve, energy and earth related problems.

So, after the 5 wave sequence up is complete the whole thing typically drops to either the trend-line or the 4th wave bottom on the preceding way up, more often the latter, here 5000 (green) , 2000 (red) and roughly 700. We have not come even close to these levels and consequently it makes a lot more sense to expect a  (large) drop than to assume that the 70/80 % retracement from the March 2009 lows will continue.

In this blog I have presented at least 20 different stocks over the past few months that have very clear , three wave retracement patterns. The German DAX index (like the DOW also 30 stocks), has a similar pattern even if it is not entirely clear which one should prevail. 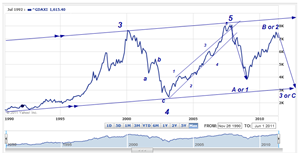 The A-B-C pattern  (on the left) is pretty obvious, defining the rise from the March 2009 lows as corrective, implying that the drop from the 2007 highs is not complete, nor has it reached the par. trend-line or the level of the 4th wave on the way up. By the way, should this interpretation be wrong, there still is not much upside (to 8500 perhaps) from the 7600 highs left . Certainly the risk/reward analysis would , without much hesitation , favour the downside.

Here in Toronto the picture is very similar;

Compared to the DOW there may be a slight difference in which top is THE top, but compared to the DAX the chart is pretty well identical in every aspect. The TSE did have a slight “throw-over” whereas the DA did not; also the TSE managed to climb right to the trend-line, the DAX did not. It is actually quite amazing that the stock indices of two countries that are so completely different in terms of their economies should look alike so much( click on the charts and you can move them side by side), which itself lends some credibility to the EW approach.

In short, from an EW perspective, the markets should be ready to go down, now or very soon and by a good amount and it would be silly to bet on the opposite.

Fundamentally there are also a lot of reasons to take a reserved approach. What got us here is an idiot that left interest rates substantially below “market” levels, this despite adhering ostensible to the market- finds-its-own-equilibrium concept. This Ayn Rand self correcting, free market concept was applied where it suited and ignored elsewhere. In the mean time all the rules were relaxed, Glass-Stegall, reg Q, accounting rules etc. etc. many of which are now gradually reversed but so far nothing really has. Ergo, it is quite difficult to understand why we are once again at these levels. Greece now has a CCC rating, the US is fighting 3 wars without knowing who the enemy is and the budget deficit has ballooned to unbelievable proportions. As the saying goes, if something cannot go on forever, it wont.