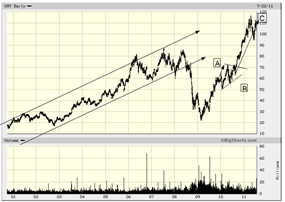 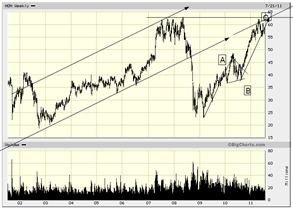 Both charts superficially look alike. Both have very distinct B-waves , I think. Caterpillar, the one on the left, far exceeded its old highs primarily as a result of being the beneficiary of a lot of digging going on in mining and construction. Honeywell, on the right, did not do quite as well but did manage to, more or less, equal the old high (double-topping), and, hitting the underside of the previous channel.

Today both reported earnings, CAT was better by 44% and HON by 40%, and quite obviously both stocks traded down, CAT by as much as $7. It is not that CAT did not meet or exceed expectations, they almost all do. It is just that the CEO said a few things about China and the US administration that the market misunderstood or simple did not like. Earnings over the long haul are obviously important but in an environment where even large corporations go from shutting down to overtime in very short periods and where costs of capital are artificially reduced to zero and where productivity goes through the roof due to previous firings only to crash again due to exhaustion, it does not make a lot of sense to pay attention to. If these are B-waves, both stocks will go down regardless of earnings.