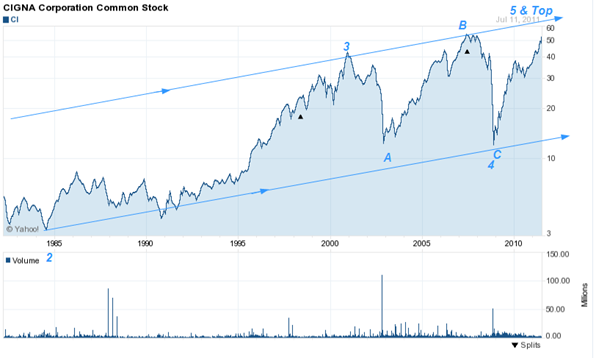 I had some very prescient calls on Cigna back in Oct. 2003, but few followers (see also a previous blog). Anyway it raises one’s level of confidence but even then I keep an open mind for the most bullish possible outcome as shown in the above chart knowing full well that it is incorrect. For this I have used a semi-log scale chart as it tends to dampen the ups and downs and consequently makes the bullish situation more plausible. If we are making a 5th wave it follows that the lows of 2009 were wave 4. If this point is connected with the wave 2 low we get a line which drawn parallel over the tops defines the channel. As a rule stocks seldom move outside the channel, particularly not when it is semi-log.  This interpretation is wrong because this 5th wave is not subdividing in 5-waves. More over the preceding b-wave should have been a three wave a-b-c, instead it is (clearly) a 5 wave move. In any case, even if , for the sake of argument, we assume this is correct despite the evidence, the stock’s maximum high is at about $62. A more correct count is the following;

Using the proper count and an arithmetic scale that high is actually only at around $57, and a double-top occurs even earlier. The B-wave and not a 5th wave becomes pretty obvious. It should peak a few dollars higher than it is today but might already be done.

The stock is trading at a P/E of less than 10, so the bulls will argue that there is a lot of “room” left to the upside. Perhaps, but this is an insurance company and lately they have everything imaginable working against them. If there is anything amazing about this stock it is that it is up here again, for a third time.

By the way, just as with Electrolux, the stock does not agree very well with the buy-and-hold philosophy. Just taking into account the big moves over the past 10 years the stock has travelled about $170, some 333% higher than the stocks present value of $51, up about 10% over the same time.