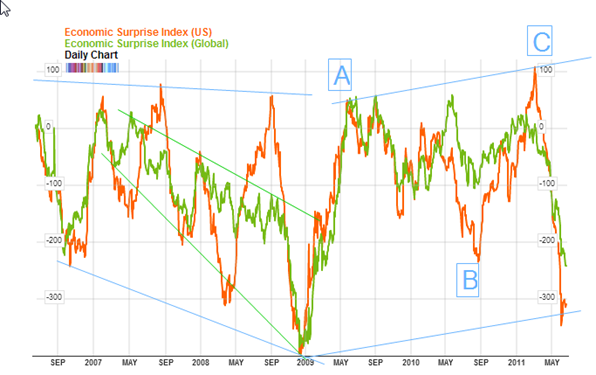 MacLean’s  came through my postbox as a teaser, I think they would like me to subscribe. In any case I leafed through it and found this interesting little gem that I had never even heard of. I have no idea how this one is compiled (Citigroup), but I did just happen to listen to some lady that pointed out that today a credit card agreement might be as long as 30 pages of legalese. she called it sneakerism, or something to that effect implying that obfuscating as much as possible is the name of the game . Not too long ago it would have been a single page.This index is, somehow, supposed to tell you to what extent  economists , read financial advisors, are wrong on their expectations. This does not necessarily imply that they are not telling you the whole truth from their point of view, after all most are upstanding blokes. What it does mean is that they are as clueless as the rest most of us, and are like Pavlov dogs in pursuit of their next gratification.

What is particularly interesting is that this index appears to be , more or less, coincident for most of it’s life. Oddly enough, it seems to be out of touch lately, or is the action just around the corner, suspended from revealing itself by all sorts of machinations by our governments desperate to keep the ball rolling, or, if you prefer, kick the can forward ???