ABX has not moved an inch over the past ten years or so.  Goldcorp has gained about $8 over the past 6 years, that is 17% absolute, and about 3% per annum compounded over those years (about the same as a ten year government bond!).This during a period that was generally recognized as the Great Recession and the end of the existing banking system as we had known it to that point. This is exactly what these stocks are supposed to protect you against but I know of a number of investors that were pretty well wiped out by G. Here are the charts; 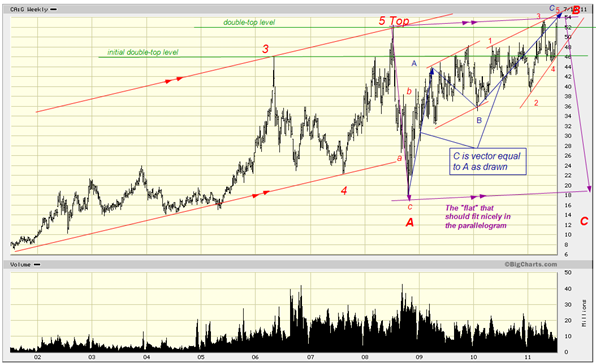 Gold itself is trading close to $1600 US, that is nice but way short of the $2600 or so to keep you inflation protected (since 1980). So the simple fact that these stocks are not moving – and Goldcorp is one of the better ones – may be telling us that inflation is not around the corner, instead we should expect serious deflation.

Had one assumed, erroneously but understandable, that the top at 3 was the top, the double top line drawn in green through that point would have warned an investor to think twice. This line is touched or crossed about ten times only to have the stock fall back below it. If that is not a good warning I do not know what is. Also over the last 3 years there have been a number of cases of overlap, see more detailed chart below; 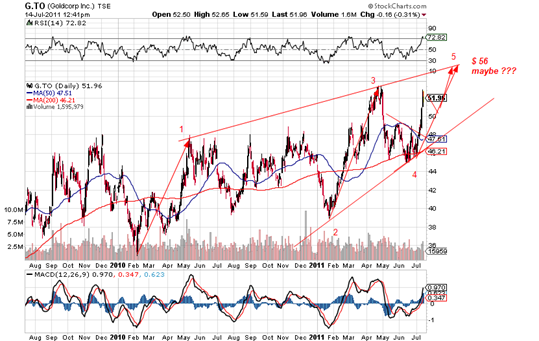 Overlap, with one exception, does not occur in bull market sequences. The exception is the “diagonal” or wedge which must be either a 5th wave or a C wave. In this case only the C wave makes any sense at all which then leads to the conclusion that the entire move up from the March ‘09 lows is a correction that is about to end. $56 is the maximum! And, of course at the present $52 level we are , once again, double topping. Time to get out.

Concerning deflation I have attempted earlier to explain that the “monetary” dogma as furthered by Keynes etc. is theoretically and pragmatically unsound and perhaps little more than rubbish, but it is mainstream and therein lies the problem.( A similar situation exists with the Efficient Market Theory, thoroughly discredited by those in the know and adored by those that are in the dark). If you think about it, the single most important input factor over the ages has been labor, not commodities, energy or any of those. The world is awash with under-employed and un–employed people. New entrants into the global workforce  are showing up everywhere by the billions. Modern production methods also make things a lot easier. You do not need a 20 year apprenticeship anymore to grind out a camshaft on your own. All you need to be able to do is read, that is enter the coordinates into the machine, throw in a blank and switch it on. The machine will do the rest to tighter tolerances than ever before, in less time and without sick days. This “transformation” is also entering into areas outside of manufacturing such as the legal , medical and brokerage businesses. So it is amazing that nobody seems to think that deflation is a real possibility.

As a hedge, gold and gold stocks are practically useless despite the deeply entrenched myth to the contrary. In the main gold moves up when stocks move up and vice versa. This is only normal considering that they are both primarily real assets. In the event of deflation, both will go down.