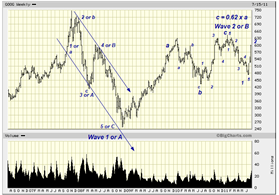 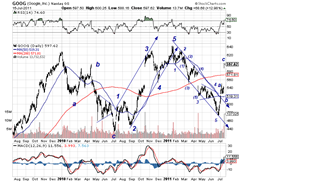 Google is a very interesting stock. Normally I would not attempt to venture a guess where this is going. Eye-balls and that kind of stuff is not my cup of tea. As a matter of principal I would never buy a stock that trades at $500 , whatever.

The chart is intriguing so I will hazard a guess. The stock should go down. The initial drop from $750 to $240 is either an A-B-C move or 5-waves, I prefer the former but is does not matter much. If it was an A-B-C that could have been it and a new bull would have started and it could be argued that the initial move back to $630 was wave 1 up and everything thereafter wave 2 down. The internals do NOT support this. On the detailed chart there are two 5-wave moves of almost equal size. They channel well. Therefore the mid leg cannot be a b in a wave 2 and must therefore be a C of the correction. The next 5 waves then has to be a wave 1 down (followed by a nice wave 2 a-b-c, mostly on news, stellar earnings). If correct the next move should be 3 down! Time will tell.