The Q-s have correlated well with both the TSX and the DAX, so they may help form an opinion with regard to the next move. 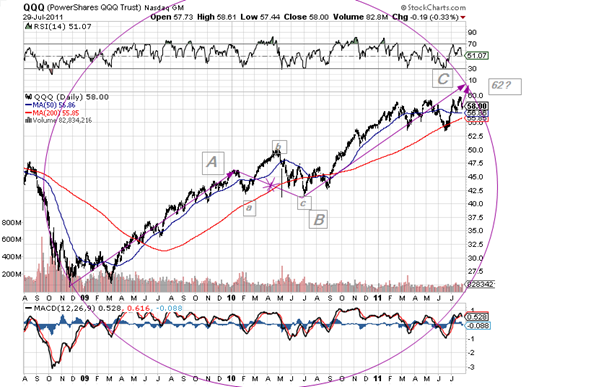 The QQQ had its low in late November of 2008, unlike most other markets. From there a clear A-B-C has developed even if the subdivisions are anything but clear. To get perfect symmetry the mid point must be where the star is. The circle represents the distance the C wave must still travel to end up with a C=A result, which, as mentioned earlier, is a very common event. Notice that the C leg is not that far from its ideal destination when drawn vector equal to the a-wave. Notice also that the double bottoms back in 2008 are about 4 months apart which would leave just one month for a new top. In more detail;

On the right, outside the chart, I have drawn one of these megaphone patterns , which , of course , is just an expanding triangle. The lines fit perfectly but it would be lacking the e wave (in green). Only once that is complete can you get the last wave 5 up. This does not fit the emotional situation that we have with the debt ceiling, nor is there enough time and, wave d is pretty clearly a 5 wave structure so it has no place in a triangle. Consequently I prefer the count in the chart. We are already in the 5th wave and have completed 1,2,3 and 4, only the 5th leg is still required. A top could be reached near 62, in a very short time from now.

Obviously it does not imply that all other markets will follow immediately, but at least it will point in the right direction.

Also as neither the A or the C are countable, it is possible that the center should be 2 blocks to the right, I do not think so but it is possible. That would add 2 months which does not fit at all with the detailed chart.