This stock’s name brings back fond memories of someone I used to work with/for who was anything but a saint, but I digress.     The above chart has the most bullish count that I could come up with, and try as I might to always be as objective as possible, I do not believe it is correct. EW is a very factual approach but, as there are many possibilities and ambiguities there always remains a large element of subjectivity, after all it is not a science but more of an art.

The above bullish interpretation is based on a clear 5-wave pattern up, with the different degrees represented by the 3 channels. The stock could rise to about $65 over the next year or so to complete the entire exercise and then it should drop to $30/$25 (4th wave and 62%). So even if this was correct your upside is already smaller than the downside. So why is this the wrong count? See detailed chart below; 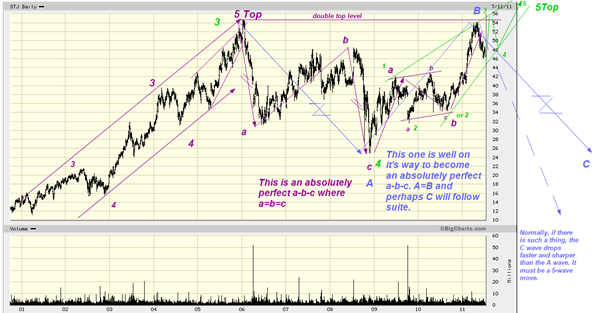 I suspect that the bullish count is incorrect because of the shape of the rise from the ‘09 lows. The drop into that low is an absolutely perfect zig-zag, just as clean and distinct as that of GE , but over a much longer time-frame. Even though that could be it , I suspect that it is only part of a much more complex correction. This notion is supported by the fact that the stock failed to double top and is dropping away from that point fast. Further more a much larger “flat” appears to be in the making where again the individual legs are equal.

How should one deal with this uncertainty? Rather than hope for the saints to help you out (they will not), remember that 30% of making money is guessing right, the remaining 100% is applying discipline . Keep holding it if you own it but put in a stop at $42 or just below. If you do not own it do not short it now, more often than not you have a better entry and less aggravation and more certainty when shorting after a wave 2 high (particularly when using options).