Back in Febr . we anticipated SU to make a B-wave, and then drop. Can. Oil sands had a similar pattern but there were good reasons to have misgivings about the validity (see previous blogs). Here are the charts , then and now; 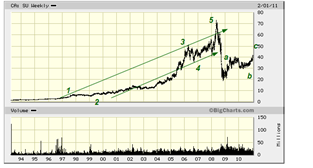 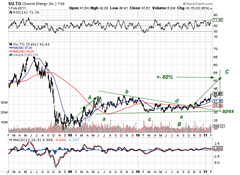 above was then, below is now; 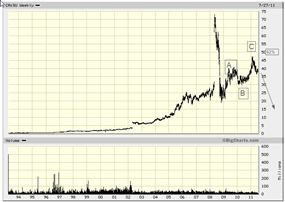 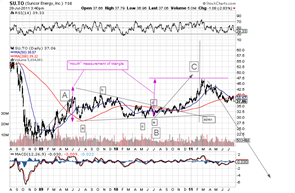 The target then was estimated to be about $50, mostly based on the usual 62% retracement. In reality the stock reached $47.5. Given the action subsequent to that event, there is overlap, it is now highly unlikely that the B-wave scenario would prove to be wrong, which implies that we will see $30 soon and much lower later.

If this prediction turns out to be correct, it will be most upsetting to the “analysts et al” that are simple convinced that this is the blue chip to own in the oil, and mostly, gas biz . If there ever was a “confirmation bias” this would be it.