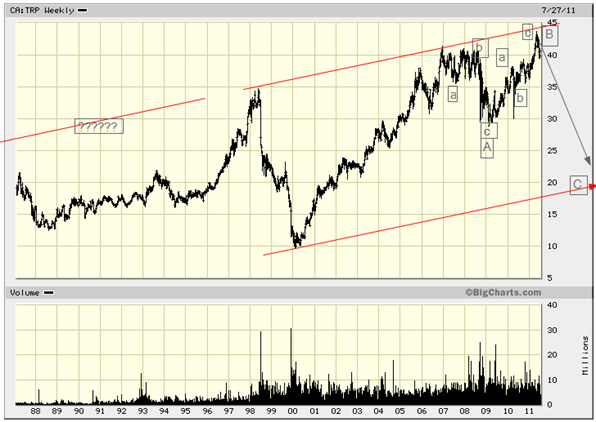 I must confess (see earlier blog) that at one point I did not expect TRP to go beyond $39. I was wrong. Such is life. Today I sincerely believe this stock is going to surprise everybody, big time.  Once upon a time, not too long ago (but well beyond the memory span of the typical investor ) this stock was considered a blue-chip, in the true meaning of that word! Widows and orphans (that is their brokers) flocked to buy this trap. Then they did the unthinkable, at least for the backwater standards of Canadian finance outside of Vancouver; they said repeatedly that they would not cut the dividend. And then they did! This lack of probity and behavior unbecoming either an officer or a gentlemen , not playing cricket and so on, did not go unnoticed . The stock was creamed to the $9 proverbial buying opportunity.

Memories are short and utilities that are sanctioned to earn a reasonable return of, for the sake of argument 6 to 7% no matter what, thrive in a zero or negative interest–rate environment. (Theoretically one could argue that at effective rates ,even below zero, the value should be infinite.) Well that was taken to heart and the stock was propelled up 5X in eleven years. Using the rule of 72 that is a return of roughly 25% per annum for the first six years. For the average broker, exactly what you should expect from a market that is there for the sole purpose of helping you retire. In any case we are looking at $30 for starters, then $20 to the trend-line, and then back to wave 4 of previous degree at $9.

All good things do come to an end, this according to the often ignored economic rule( applicable to other disciplines as well)  that if something cannot go on forever, it won’t. That is where we are today , actually we were there in late 2007 but got lucky. We got a B-wave, to be more precise an irregular B-wave. Typically the downdraft is even more devastating after an irregular B-wave than a normal one.

Clearly a prediction like this will meet with derision , but it might be useful to remember that trap lost 71% of it’s value a little more than ten years ago. There is absolutely no reason why this one could not live up to it’s name again!