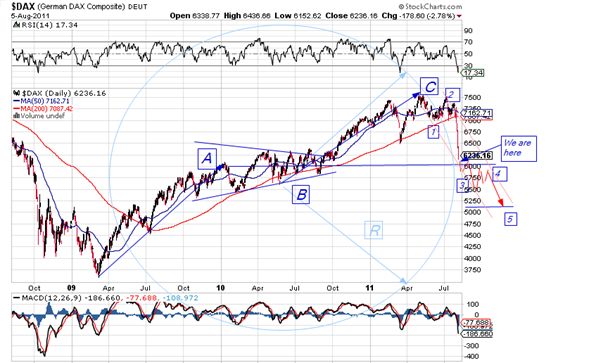 We were correct in stating, the other day, that the DAX did not have the time to have a thrust up. Like all markets, not surprisingly considering the abundance of B-waves (see for instance Siemens, SI.) the DAX went down like a rock and now sits at about 18% below the top, having lost about 38% of the gains made since the lows in March of ‘09. Others have done worse, see below Zurich’s SMI.

Where from here? I think it is pretty clear that we had an A-B-C up,with the B as a triangle.    This is a correction and therefore we should see a new low below the March low. Unless we are making a far more complex structure, perhaps a multi year triangle.  For the moment that is of little concern as the present leg down is not complete. We still require a 4-5 of 3, and the a 4th and 5th wave to complete this down-leg. A reasonable initial target would be about 5100. That level is at the lowest point of the triangle B and also about a 60% give-back of the entire rally of the last 2+ years. 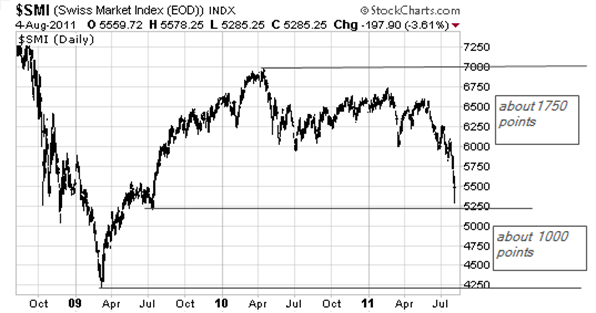 The Zurich index had gained roughly 2750 points the year after the low. It has been in decline for a year and 1/2 and has lost 1750 points or about 60%. That is a nice Fibo # and could signal that it is complete. However this is highly unlikely because the pattern certainly is not. In any case it is not unreasonable to assume that the DAX could also drop this much. Note that any chart using Swiss Francs as a measuring stick looks awful. Expressed in US dollars the drop would be a lot less pronounced.