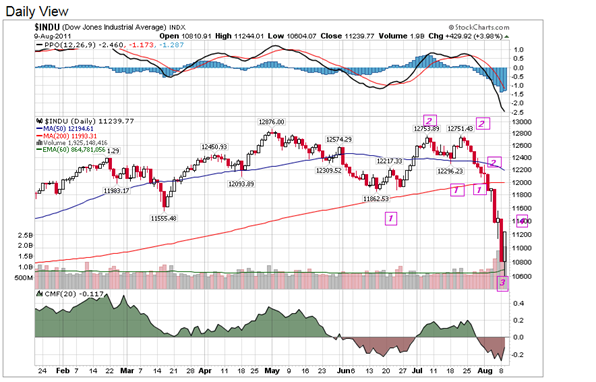 Here we have it. A market rejoicing in the fact that even the Fed. ,certainly not the most astute observer, believes it is time to tell us that it will hold rates at unbelievable low rates for another two years. What happened to capital formation, the cornerstone of all civilization, what happened to honesty, do we really have to go by the backdoor by way of degrading our currency?? I do not think that Bernanke has even a remote idea what he is doing.

From an EW perspective , we may be in wave 4 of 3 of something the degree of which is yet unclear. The market should go down first and then may go higher, this may take some time, but in the end the fundamentals will prevail, and that means stocks are going lower.

What happened to capital formation? If you were a bond trader is it time to pack up? In my opinion the Fed. has no idea what it is doing. We need much higher interest rates, period.