This fund or ETF seeks quote – investment results that correspond generally to the price and yield performance, before fees and expenses, to the performance of the real estate sector of the US equity market, as represented by the Dow Jones US Real Estate Index – unquote. There are 84 components in this index, mostly REITs. Here is the chart: 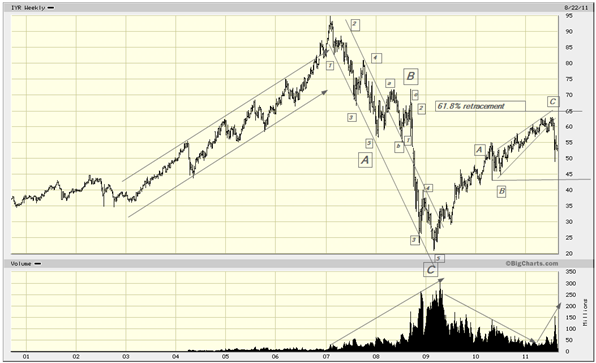 This “picture” should be a familiar one. This iShare only came into existence in 2000 so the chart covers less time than usual. The explosive run-up into the $95 high is pretty standard. The drop down to $21 or so a little more than standard, but the structure is a very nice A-B-C. That could be all of the correction were it not that the rally from there has an identical A-B-C, or corrective structure. It follows then that at the very least the rally should become more complex, this being just the first large leg, or we go to levels below the $21 low. Either way we will go to about $43 as a minimum, the start of a wedge wave C. Notice that the volume rises as the ETF trades down and v.v. According to Bigcharts short interest on this ETF is running at 87.18% an unheard of high percentage. The shorts are mostly smarter than the longs so this does not bode well for the immediate future.

In Canada real estate is immune to what happens in the world. Even so one has to wonder how anyone can live in Vancouver. According to RBC it now takes 92.5% of pretax household income to pay for the average house. As income taxes are around 20% or so the new homeowner can forget about eating or anything else. In Toronto it is a mere 51.9% so you might still be able to eat, but that is about it. Interest rates better not go up!