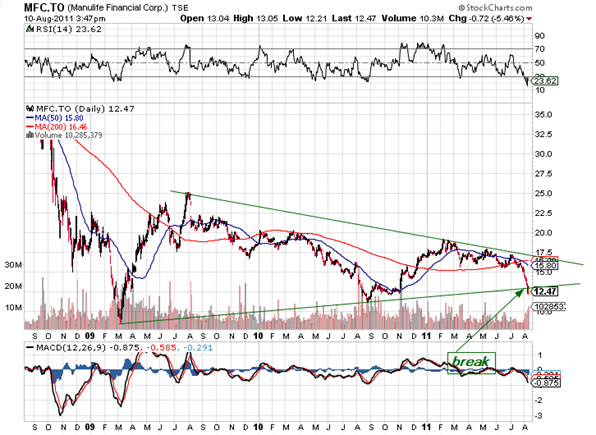 As explained before, Manulife is one of the best barometers for the market as a whole. They bought their own sales talk and believed the rather unscientific statistical nonsense that there had never been a 10 year period during which the market went down. This was one of those six sigma events that could only happen once every 10,000,000 years. As luck would have it took only two or three years for the proverbial s…. to hit the fan.

Lately the Fed’s policy of keeping rates low for another two years is causing a “perfect storm” for the insurance companies. For MFC this may just be the straw that breaks the camel’s back. The break shown above, makes a triangle formation not entirely impossible but very unlikely. Probable the stock will simple proceed down without a bounce. The old low around $9 looks like it can now be broken. A possible target would be $5, but something will happen before we get there, but that something probable will not help existing shareholders..