Back in April 2009 this stock was recommended for a move up in wave 3. It was a little under $3 at the time. Since then it had moved up considerable; 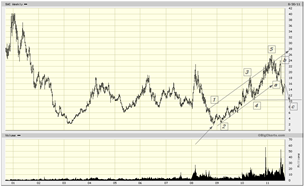 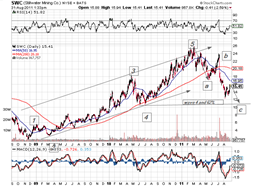 It got to $26 and then started breaking down. It looks like 5-waves up followed by an a-b-c down. The down part is clearly not yet complete but should be around $10.50 or so, where wave 4 of previous degree resides and where the rise from the lows will be corrected by about 62%. These miners dig up palladium and platinum, both precious metals that are also of commercial use particularly in catalytic converters . You win both ways!