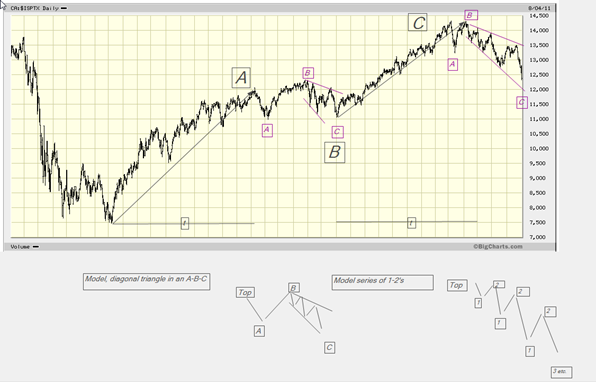 Here we have the TSX. Again the A-B-C rise from the lows is clear. Already the C is approaching the time spent in A. In my 15th of June blog I mentioned that there was still the possibility that we were doing an A-B-C, with the C as a diagonal. At the time the TSX was some 800 odd points higher. The alternative would be a 1-2 series.

The action in the middle, the big B wave, may well have been such a structure. The differences are small between that and what we have just done in the last5 months or so. First of all the top in the recent pattern was most likely the second top, not the first. This would take away the A and B. Secondly the structure seem to have a wave too many. Also the size looks out of proportion.  Accordingly my guess is that we are looking at a series of 1-2, a decidedly bearish situation.

Another serious consideration is that if you look at Italy, France, the UK, Taiwan and all over the world, I have not found a single other index that supports the bullish A-B-C scenario. Instead many clearly show acceleration down, which fits the 1-2’s scenario perfectly. Also the very large number of individual stocks that have clear A-B-C corrective structures, finished, or about to finish over the past two months are indicative that this is it, we should then go a lot further! To illustrate the point, below is the SMI, Zurich, and it is by no means the worst. By the way it has broken 30 year support lines (see blog from a few days ago).If we applied this to the TSE we would be at about 8500.