Time Warner is a great example to illustrate the point that a triangle is not always what it seems (they just reported with reasonable results, so the stock is down); 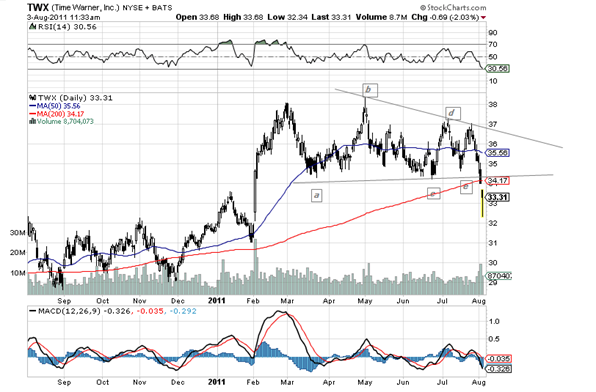 A few days ago one would be forgiven to think that this is a triangle, an irregular at that since the peak point at the b-leg is above the start of a. Clearly this does not work anymore. Two other counts may be applicable. First, the actual top was the March high and not the May one; this would lead to an a down, irregular b up and now in c, perhaps 3 of c. C can be and usually is much larger than a. Next, if the top was the May top we could be in the process of doing a 1-2,1-2 series and again we are in wave 3 of 3. In both cases you can easily drop to $28 or so. One way to anticipate all this is by looking at the RSI or MACD, they should be rather flat and not directional! Looking at a slighter larger perspective, we get; 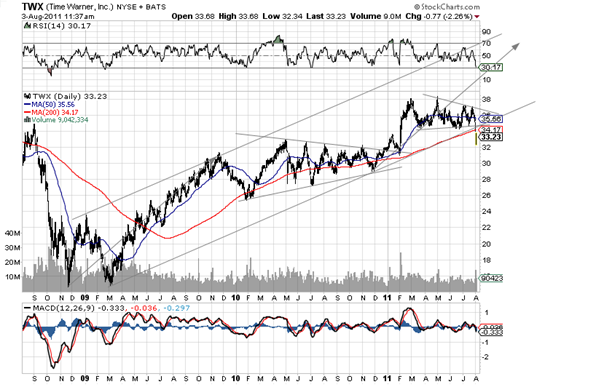 We know that triangles occur exclusively in wave 4 or wave B positions. Superficially there are two triangles in this chart. The one in the middle takes up almost 1/2 of the chart and, even if the subdivisions are not perfectly clear, rotates very evenly around the +/_ $30 level. Given its sheer size, and assuming that it is indeed a triangle, it would almost have to be in a wave b position and not a wave 4. We are not sure which low was the real one , the Dec. or March one. If it was the March one it is more difficult to count 3 waves into the start of the triangle. Also on this longer chart the RSI peaks in Aug of 2010 (a year ago!) and deteriorates from then. The MACD is not much better having peaked in March of this year. Furthermore the stock is stalling by spending most of its time in the lower half of the channel. So the smaller triangle would have to be a 4th wave triangle. This is indeed easy to count except that the triangle becomes completely disproportionate to the rest of the c wave.

It does not matter much at this juncture if the move up from the low was an a-b-c correction or a 5 wave initial bull wave. A retracement of 60%  will follow either way. 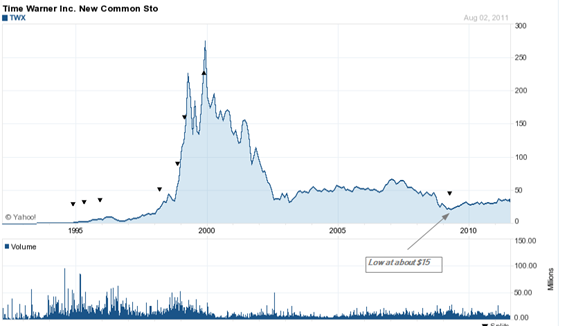 Depending how that goes we can asses whether or not a return to $70 or more wealth destruction is in the cards, after all, just because a stock has lost 95% of is value, does not mean that it cannot do it again.