Sunlife and Manulife are both  relatively “sleepy” insurance companies. Manu is the bigger of the two at about 22 bln whereas Sun clocks in at about 15 bln. Both demutualizes perhaps 10 years ago or so and, as is almost invariable the case, it is after all in the nature of man to be more reckless with other people’s money than their own, both got a wee bit more aggressive, but Manu much more so. We all know that morbidity and mortality only change with the speed of a glacier so there was no need to call the home office to check the latest premium, the big mistake, on the part of Manu, was to assume that this might also apply to stock markets. Quite amazing considering that the market had just before the introduction of their “prime plus” product experienced a whopping loss during the tech implosion. Anyway, here are both charts; 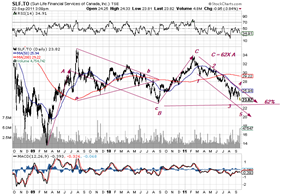 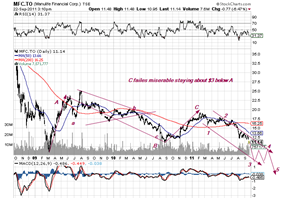 Sunlife is on the left and Manu on the right. The counts shown are neither perfect or beyond doubt, but that of Sunlife follows the pattern observed with many other financials, that is an A-B-C up followed by a drop back to the level of the B-leg (not quite) Manu should have had the same count, which arguable it did except that the whole thing is distorted and skewed to the downside. The C wave failed miserable (we warned about this several times!) and with the stock at $11.12 we are within spitting distance of the lows at $9+. The problem is that the last down-leg cannot possible be complete. Barring some miracle the stock is going in the direction of $5-6. Could we possible be looking at SuMa as the next big event after Confed??