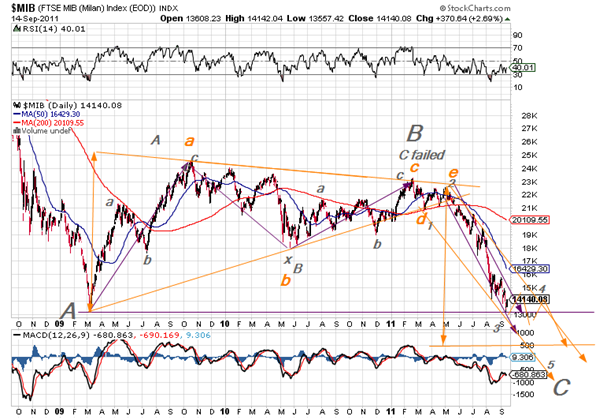 History has a tendency to repeat itself. Years ago Mr. Leeson managed to single-handedly (not quite), bankrupt his employer Barrons, perhaps the most venerable institution in the UK. Then we had a 7 bln. loss at a French bank and now 2 bln. at UBS. Having myself been in charge of  dealing operations at two separate US banks in Canada, I cannot for the life of me understand how these guys can get away with it except is there is gross neglect on the part of these guys’ employer.

When treasury secretary Rubin decided to use the treasury’s funds to bail out Mexico, it was properly viewed as an unlawful use of his powers. Recently the constitutional court in Karlsruhe deemed the actions of  the German government to shore up the ECB’s bail-out fund as  perfectly legal despite the fact that one does not need to be a legal scholar to know that without any doubt at all it is presently unconstitutional.

So things do repeat or at least rhyme and looking at the exchange in Milan, Italy we are now back at the lows of March 2009. The preferred count would be the standard A-B-C rally that failed to make a new high (an alternative would be a triangle). Here the drop from the Feb. highs seems to be incomplete, needing at least one (if not more) 4 and 5 legs to make it the 5 wave sequence that it should become. This may well become an example for others to follow.

Mr. Geithner who three years ago impressed nobody by his boyish display of inexperience is know back on his white horse galloping to the rescue of Europe’s economy. Just to prove that history does repeat they are again looking primarily at the liquidity problem, not the solvability. All this heart-warming stuff may give that pause that we need. Below is the EWG, another proxy for the DAX. I bring this up constantly and repeatedly as I do not think anyone is actually paying attention. 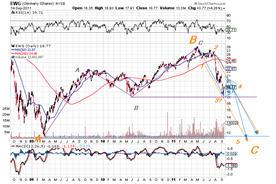 The EWG is sitting right at the level of the B-leg of the rally (the DAX was a little lower). There is no way that the 5 wave large C down is complete. I would not suggest that the German index needs to follow Milan down the 71% it already has lost (it comes from 45000), but I would nevertheless expect the direction to be the same. As can be seen on the larger scale chart the EWG comes from about 37 and should it get to 8 (where wave 4 of previous degree resides, a very normal event ), the EWG could conceivable go down 78%. That, by the way, would erase all gains over the previous ten years, which , relatively speaking, is not all that dramatic. Athens is, of course ahead of everyone and may actually soon become a buy, if for no other reason than that there is so little room to the downside.