These guys have been around for more than a century, and are in the business of lighting up your life, you health and your general well-being. They are also “royal”, perhaps the Queen bought a new light bulb there. Last time they reported terrible numbers, supposedly because the retail sector, in which they are big, did not do so well. They also lifted my spirits considerable by paying for my stay at the University of Amsterdam for 7 years.

It is a unique company in many respects. It operates in every country in the world and is the only company that actually uses “replacement cost accounting”. Perhaps to their detriment as few people, particularly in the US, understand it. In a way it is senseless complexity that seems to permeate many sectors of their business, this in contrast to their present logo. No doubt someone higher up was infatuated with Jane Austen.

The stock moves like a jo-jo. Here are an old chart adjusted for the present, and a new chart: 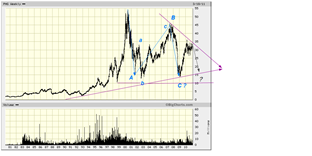 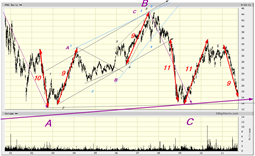 For some reason Bigcharts does not go back that far anymore, which is why I updated an old chart , on the left. Notice the purple line running through the bottoms which I replicated in the chart on the right (click to enlarge). Now let’s forget about EW. In fat red I highlighted 6 periods during which the stock kept moving in one direction without even a minor pause. Two are 9 blocks long, one is 10 blocks, two more are 11 blocks and the present one is at 9 blocks. Not including the present one that is an average of 10 blocks, five times! I know this is not very scientific but could it just be possible that this 6th time will emulate the 5 others and can then only go one single block further, on average. Also, and this is more to the point, once the 10 blocks are done the stock reverses for at least $10 every single time. So even if you are early by a block, or even 2, you still stand to make $6 if history repeats. The proximity of the purple line to the present price suggests that there may only be a dollar more to go.