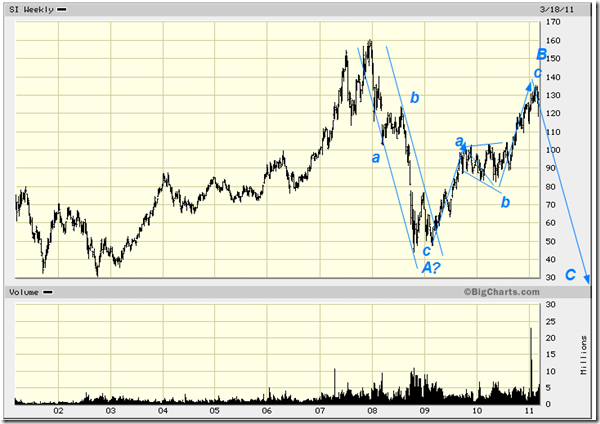 This was our prognosis back in March of this year. Siemens then traded at around $120 fractionally below the high. Then it was suggested that this stock would probable be an excellent proxy for what the DAX might do, after all it is a very prominent company within the German economy. So far this is what has happened; 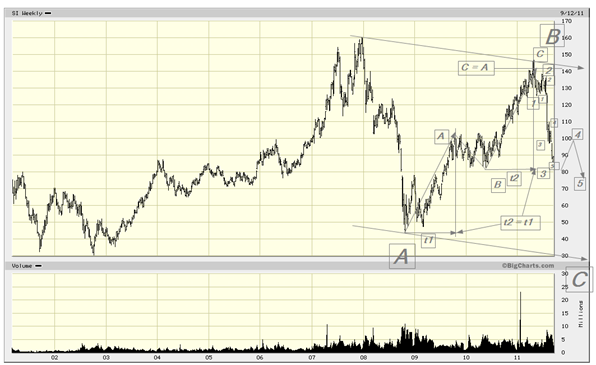 $81/$82 was suggested as a first stopping level, for the simple reason the that equates with the level of the B-wave, or pause in the rally from the lows of 2008. Notice, by the way , that the entire and larger B-wave is near perfect, with both legs almost vector equal, the second leg just slightly exceeding the ideal level of $142.

From a wave count perspective it is highly unlikely that the initial move down is complete. This is shown below in more detail; 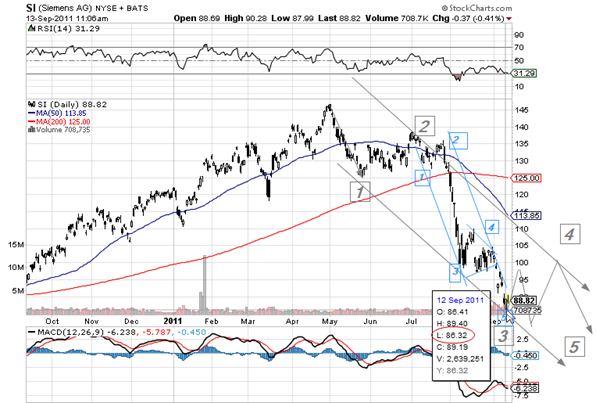 At this point it is not entirely clear if wave 3 (in light blue) is complete or not. We did get to a low of $86.32 (and even lower intra-day outside US hours, so it is plausible. In any event at least a 4 and 5 is required to complete this first wave. The DAX,  of course, already has gone beyond this $81 equivalent level and has declined  more than the 61.8%  of the entire rally, at least on an intraday basis (roughly 5120).

Wave 4 and 5 in the above chart have been drawn on the assumption that the entire drop since $145 in May or June is just wave 1 down! It is however entirely possible that we get an extension and that wave 5 takes us down so far that all of this will prove to be the entire C wave. Waves 1 and 3 have taken the stock from $145 to $85 or about $60. If wave 5, as is so often the case, ends up being equal to 1 and 3 combined and further supposing wave 5 would start around $100 then that would take the stock close to the ideal target of $30. The $10 difference could be accommodated if wave 4 becomes a triangle rather than an irregular flat as shown. The DAX would no doubt follow down approximately the same path. That this is not too far-fetched possibility is pretty evident if one considers that wave A in 2008 took the stock down $120 (from $160 to $40) in 10 months. A similar feat (see the parallelogram) now would take the stock to $145-$120= $25 around Jan. / Febr. of 2012 . If wave 4 starts in a week or so and lasts a little over a month we could be in Nov. by the time wave 5 starts. If 5 then lasts about the same time as wave 3 (2 1/2 months so far) the timing would be dead on! The whole episode would look like this! 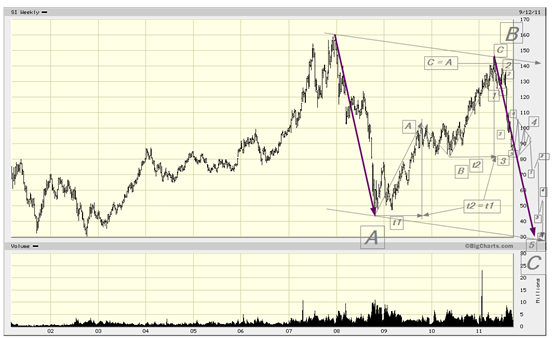 Should the slight throw-over of $4 or so in April be repeated on the downside, the stock would trade precisely at $25. A quick look at GE tells us that this is entirely possible.

The moral of all this is that one should avoid the temptation of buying the “dips” because the market is so cheap. If things go as fast as the above scenario suggests you will not have a chance to get out before the bottom arrives and by then you will be a lot poorer. Once I was asked testily by a former “colleague” of mine what this has to do with Canada and the TSE. The answer then and now is that what the DAX does, the TSE does as correlations approach 1 in a bear market.