Today it was reported that silver had its largest drop since 1979. Not sure but it was Silver Thursday, 27 of March 1980 that the Hunt brothers , Nelson Bunker and William Hubert were caught with there their pants down . started the long process of going tits up from being billionaires . Only in Texas, USA.

This is the chart today; 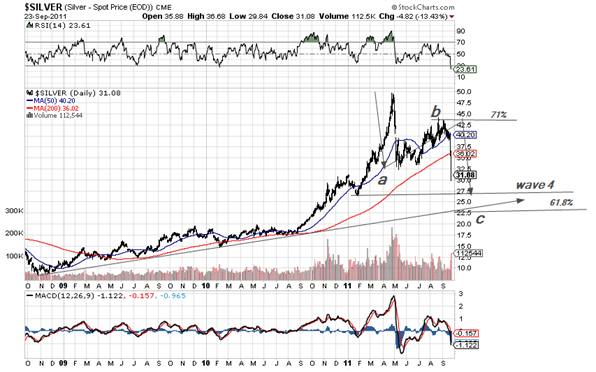 Lets start of with conceding that I have no idea where this might go, other than listening to most people that are cock-sure it is up making me wonder at the very least. So lets just be objective! Common sense tells me that this should revert to the mean, all things do at some point. The mean to regress to is about $23 by the time this might happen. Next we should go back to wave 4 of previous degree, and having no idea what the count might be , it still looks like that might be at $27. Next we have the c=a vector symmetry, again around $27. Then there is that silly wave count, clearly wave c cannot be complete, a little 4 and 5 are the very least that is still needed. Again $27 stands out as a reasonable target.  Then there is the RSI, already at a 3 year low but still not excessive. Anytime now. The MACD is already up, but that means very little.

There you have it, $25 and the stuff is a buy, a nice 50% drop and about 62% of the rise from the lows of 3 years ago. Will it stop there? No idea. Is there going to be another billionaire ready to corner the market, not if they know the history, but that is the beauty of it all, they do not and that is why this can , and will, go on forever.

I like the symmetry, probable a buy at $27, at least for a trade, but do not go to the washroom while you hold the position, it could be painful.