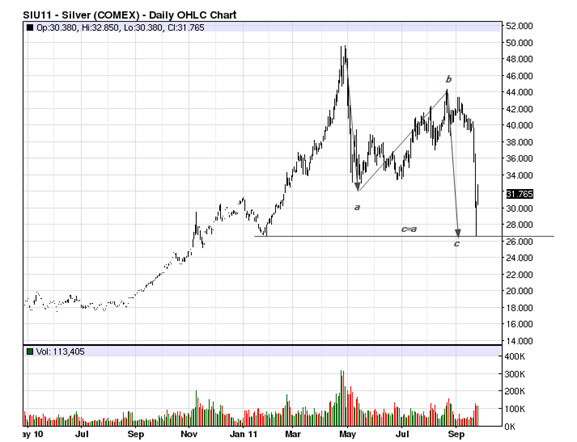 This , I believe , is the Dec. Futures contract as it trades electronically. The very first thing that stands out is that this looks and smells like a completed a-b-c flat correction, that drops to the 4th wave of previous degree as well as a level where essentially 50% of the rise since around 1992 (about $4) is retraced. The spot price looks as if wave c is not quite complete, needing a small 4 and 5 which could be the case here as well and would take the price to, perhaps, $24.50. They main point , however is that this looks and feels like a correction and therefore one would expect new highs at some point in the future. But look at this; 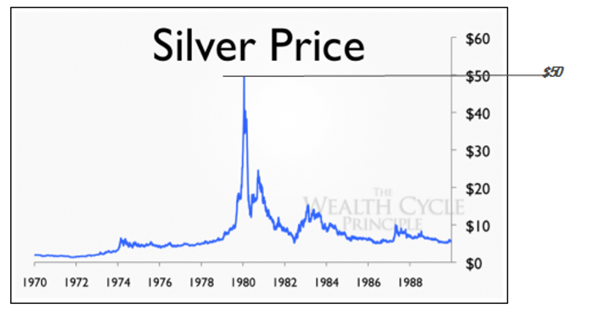 This is spot silver, the futures actually got to $52.50 at the same time gold briefly hit $895. What stands out is that with an interval of 32 years the stuff stops dead in its tracks at essentially the exact same price level of $50 and, arguable, for the exact same reasons.

Futures (and other derivatives) are peculiar in that you can trade any amount provided that there is a counter-party willing to take the other side, the actual stuff does not have to exist, at least not in those quantities. When a contract starts trading it starts small and then the volume grows as the contract moves to the front (which is why the line on the top chart gets more solid). Then as its maturity date comes closer the contracts are offset and the volume contracts to a fraction of what it was, what is not offset will be assigned and actual delivery will be made from the short to the long. Most participants are there for the ride, not the destination and delivery is normally the last thing you want. The Hunt Brothers (you could not own gold at the time in the US) in contrast wanted the stuff and declined to offset and as a result effectively “cornered” the market, there was not enough stuff. According to some cynics the CBOT and COMEX, with the help of the CRTC “solved” the problem by first reducing the limits allowed per trader, upping the margin requirements and then allowing “liquidation” trades only. The net effect was to change the rules of the game, bankrupting the Hunt Brothers and saving the administration  the embarrassment of having to acknowledge , only 9 years after Nixon went off convertibility, that they were debasing the currency big time. This is happening again as margin requirements have been increased a few times already. The open question now is will they let it go higher? For some of the nefarious activities of the authorities at the time, Google the Hunt Brothers and Michael Maloney .