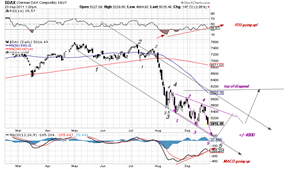 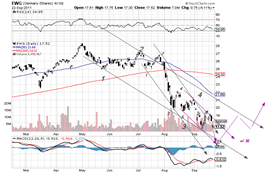 Recognizing the patterns is often as much a matter of art as science. Of course all counts must adhere strictly to the pragmatic rules but beyond that it is sometimes simple a matter of finding that count that is the most “elegant” and therefore , more often than not, the most correct one. Other inputs are also important. It is a Friday and the DAX is down again by 3%, markets lately seem to turn on Fridays or Mondays perhaps because of the political nature of our present macro-economic problem. This gives them 2 extra days to dream up the next band-aid. Moreover the RSI and MACD are decidedly positive. In short my gut tells me that this thing COULD reverse any moment. As pointed out earlier we could also just continue the waterfall. At this time I think we might have gone too far too fast. The pattern that fits most elegantly is the “expanding diagonal triangle”. On the long run there is no doubt that we need to go lower but there might,after all , be a trade here.

The diagonal is only visible in the DAX, not the EWG (or the STOX50, not shown), but there are ways to make it work. Perhaps we are only at the end of wave 3 on the DAX. It is also possible that we are, and perhaps have been, in wave 4 and are simple testing the lows one more time. In any case it has lost over 62% of the rally (at about 5100) so a nice rebound is definitely not out of the question. We would be buyers at 4800 or 16, with a very tight stop. The potential is for 1000 points or 5, the stop should be commensurate. Be aware that the EWG is rather artificial, and does not trade during the same hours that Germany does. It is therefore possible that the target would have been reached Monday morning and yet you do not get filled!