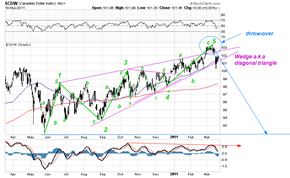 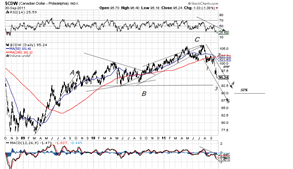 On the left the blog from March 18, 2011, six months ago and on the right where we are today. At the time, and even today, everybody simple knows that the Canadian dollar is going to strengthen against it’s US counterpart. This wisdom is simple not challenged anywhere and that usually means it is dead wrong.  Back in March when the dollar had made its first top it looked like a “wedge” was complete and consequently the dollar should fall, at the very least , to the level of the base of that wedge, around 92. We are at about 95 so there is more to go.

EW on currencies is rather problematic as currencies are relative values, not absolute like equities. The 5 up 3 down concept cannot be correct which is easily proven by looking at the exchange rate from the perspective of two traders, one on the Canadian side and the other on the US. If one of them observes 5 waves the other must as well but one is going up and the other down! Nevertheless many moves follow EW patterns;

The Canadian dollar had peaked around 103 back in 1974 or thereabouts. It fell to 61.8 cents (or the inverse, 1.618) in Oct of 2003, pretty much on target for the point obtained by stylizing the A-B-C correction. At the time everybody knew the C$ was going to 50 cents. Not so. Again I suspect we are doing an a-b-c (perhaps wave 2 in a long-term uptrend)  Wave a ended at about 77 cents and since b only got to 106, 4 cents shy of the top of one, symmetry would lead to 77-4 = 73 cents which is roughly at the 62% retracement level. If this will indeed happen remains to be seen but it is a good roadmap for starters and a very good reason to get out of Canadian stocks.