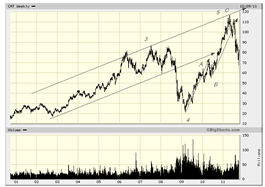 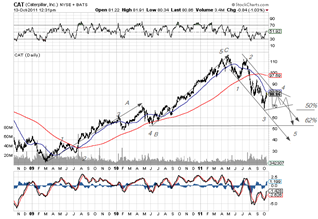 Just a little refresher on CAT, there are a few previous blogs as well.

We prefer the B-wave idea as it is more in accordance with the rest of the markets, but it really does not make a lot of difference for the next move as both lead to new lows ultimately. The B-wave has the advantage that it provides a very well defined first initial target, namely the level of the B-wave within the larger B-wave, about $53 or so. That also coincides with a 62% retracement of the rally from the lows of March 2009. Given the speed of the drop so far, we could be at those lows in about 4/5 months. Here is the detail; 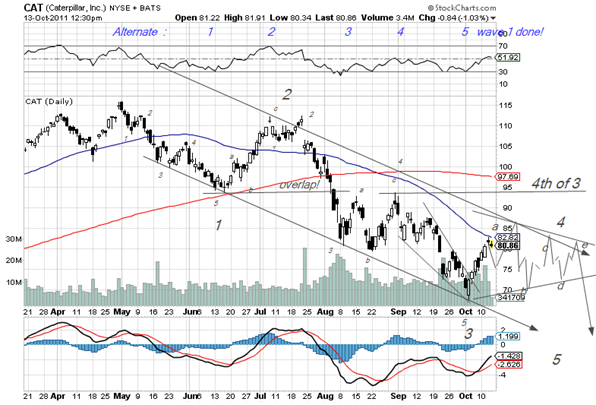 Given the proportions of the waves from $115 , I am pretty certain that we have done a wave 1,2 and 3 and are now in 4. (This could be wrong and the whole first wave is already complete, see blue alternative). Given that 3 in this count is about twice the size of 1 it is essentially a more elegant count. Assuming this is correct than we would expect alternation between 2 and 4, as 2 is a zig-zag 4 should be a sideways move, either a flat or a triangle. So you should get at least a,b and c and perhaps (if a triangle) d and e. Consequently it may be worth waiting a little to see that you do get a, b and c as the stock will not change much in value and you avoid the risk of it going higher. The 4th wave is at around $94, and this is also where overlap would occur, negating this count in favor of the alternative. Once the flat or triangle is complete wave 5 should take the stock close to the target of $53 to complete wave 1. That is where you could get the $30-$40 rebound before the bear market resumes.

If, and I do not think so, the alternate is correct, that is wave 1 is already complete than wave 2 would retrace about 1/2 to 2/3  so $95 to $105 is possible Waves 2 are usually zig-zags so this should happen fairly fast.