This is the world’s second largest chemical company after Germany’s BASF, here are the charts; 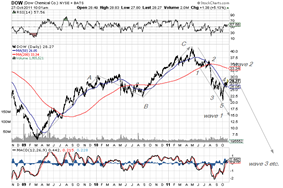 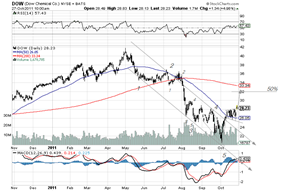 You can click on the charts to enlarge. The large B-wave on the left is particularly clear; it calls for new lows sometime in the future, that is below the roughly $7 back in March 2009. There are alternatives but none that are very plausible at this point.

On the short-term chart on the right, the 5 wave initial drop is equally clear on this stock. The drop is from roughly $44 to $20, almost cut in half. As always, a 50% or even larger rebound is normal. That could take this stock to $32, where, by coincidence , we would have a completed a-b-c wave 2 with c=a. It does not have to go that far and it can go a little further, but the structure is perfectly clear. Wave 3 etc will start at some point in the very near future and it will be fast and furious compared to what we have so far.