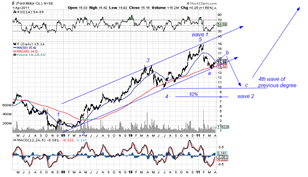 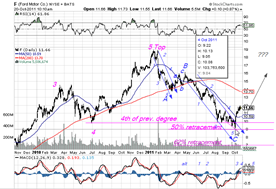 On the left the April outlook which was twice adjusted to events in the market. The last one that this was definitely a buy if you could get it under $9 (or thereabouts, of course). It got to $9.05 . On the right what actually has happened. The small c in the B-leg was expected to go to about $17, it only reached $16, but then the stock followed the script pretty well verbatim. What we have here is a wave 2 retracement of wave one up, retracing 50% (which is low for 2’s) and doing so in a 5-3-5 pattern. An alternative would suggest that the C wave is as yet incomplete. This alternative has little credibility considering that all other criteria have been met rather nicely. Wave 5 of C is most likely a wedge diagonal triangle adding certainty to the count. If this is indeed a new bull market the stock could go much higher, but in this dicey environment I would not expect too much soon.

This one could continue up to $16 easily. Before that there may be a wave 2 of 3 up that would interrupt the process. In the meantime the stock is up about 29% from the lows. There is talk that the company will reinstate it’s dividend at next weeks meeting (according to Barclays). It would supposedly be 8 cents a quarter, which, if I calculate it correctly is 32 cents per annum or at a stock price of $11.66 is a dividend of 2.75%, not bad.