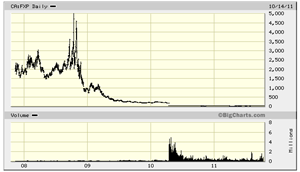 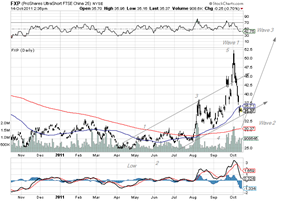 This is not for the faint of heart. By the way, I first recommended it on Feb.12, 2010, when it was trading at $9.41, see my blog of the same date, you are still up more than 3X. The most recent low was around April/May of this year and since then it did a very promising 5 wave move up and a subsequent correction which is close to completion.

I have no doubt that China is going through a miraculous transition economically but it is also beyond any question that there stats are unreliable. Being a centrally planned state with many elements of raw capitalism it would seem that we have the ingredients for some very explosive surprises. First it was the US with a mountain of debt, today they recorded the 3d trillion dollar shortfall at 1.300.000.000.000, almost $4000 per person!/per year. This has all been forgotten as Europe took over the limelight, absolutely nothing has changed there either but we will have to wait a month or more to find out. Next shock could come from China, money supply is supposedly not growing at 50% a year anymore, if at all. Inflation is running at 6% if you believe their stats and it is rumored that some large builders are drowning in debt. The shadow banking system is out of control etc.etc.    Add to your position or start a position between here and $30. This, quite superfluously, is an inverted instrument, bad is good.