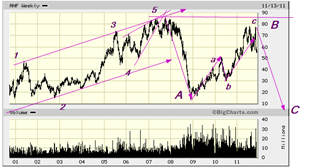 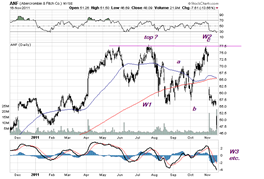 This stock dropped from about $78 to $47 in a matter of a few weeks. The recent quarter performance was actually quite good despite a “miss” of 14 cents, if you bothered to read the details. This retailer of moderately upscale clothing sold a lot more than the previous year but suffered from a slight compression of margin. Were there warning signs to prepare you for  a drop of almost 40%??

1. The top was actually in 07, and one can argue which of the three is the real one, but the 5 waves up and the very distinct wedge for the 5th wave pretty well guaranteed that that was the top.

2. The fairly clear B-wave from the lows, almost retracing the entire drop warns that the move is not “real”.

3. The triple top, just as in 07 is a classic formation telling you to get out, or at least step aside.

4. The a-b-c corrective wave 2, retracing, again, almost all of wave 1, warns you that it too is not real.

5. The p/e ratio , now at 21 according to Bigcharts must have been in the low 30-ties, not cheap by any standard.

There will be more of these.