This bank has done exceptionally well; together with the TD it is one of the few Canadian banks that is trading at levels above what they were prior to the second great recession. It trades at a p/e of almost 10 so,by that measure at least, it is not even overvalued. Today’s action by the Fed and half a dozen other Central Banks, boosted bank stocks all over the world except parts of Asia where the news came out too late. The market took comfort in the idea that at least the world banking system was not going to come to a screeching halt due to lack of liquidity (this came as a surprise, most were expecting QE3, but the writing was on the wall. Our own CB Governor Mr. Carney only a few days ago, remarked that the situation was “barely contained”. A level of frankness that is unheard of in those circles. He should know given his new side job). We will probable never know quite how dire the situation really was, but the message that a chain is only as strong as it’s weakest link, was brought home rather abruptly a week earlier when the Germans could not sell a government issue. All of a sudden they are all in the same boat, and not just the Euro zone , but the world at large.

There is just one little problem which is best illustrated by the following example. Suppose you go out for a night on the town with 17+ friends and forget to make arrangements about who pays what and when. It is 3 o’clock and most of your friends have left. You are presented with a huge bar bill that you really do not want to pay. The barkeeper offers you credit for a few days. Does this solve the problem? Obviously not. The problem is not liquidity, but solvency, something the central banks have little or no influence over. I suspect that in EW terms we are looking at part of a wave 2 of C as shown with the National Bank charts. 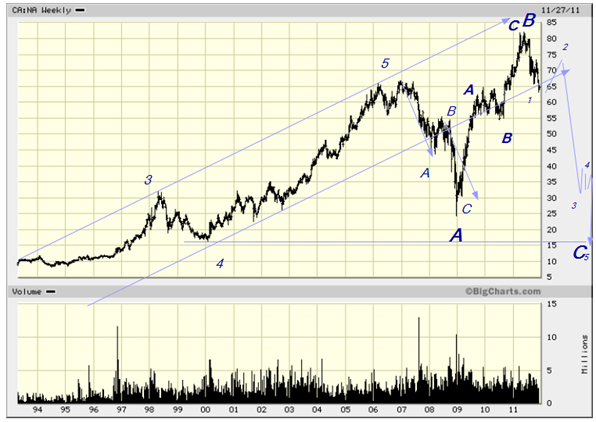 It is near impossible to be absolutely sure that the leg up from the 09 lows was a B wave. However if you look at TD bank that has followed a similar trajectory and you stop to consider that the C part is an almost exact 62% of the A, it is a very plausible assumption. On top of that it really is rather academic as, if this was a fifth wave, you would still fall  to $25 (4th of previous degree) instead of $15. Here it is in greater detail; 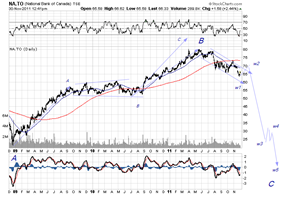 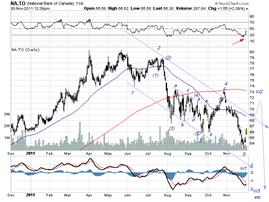 You can always enlarge the chart by clicking on it. First the B-wave. Clearly it is divided in two almost equal parts and it is almost impossible to construct a 5-wave move out of this. Then looking at the short term chart, it too is quite clear. The triangle is a wave 4 of 3, the only proviso would be that the 5th wave may not even be over as it is hard to subdivide into 5 waves, even though it’s length is more than adequate. Also, though unlikely, we could still be in a wave 4 triangle, having completed the a and b and now in c with d and e still to go. The sheer size of the second leg in the triangle makes it very unlikely, certainly relative to the channel. Time will tell.