Some luxury goods sell more at a higher price. They are called Veblen goods after one Thorstein Veblen who first pioneered this perverse phenomenon  of conspicuous consumption and status-seeking. Incidentally stocks arguable belong to this category as well. If you recently tried to get a team of polo players together for a Saturday afternoon game, you will know what I am getting at. Here are the charts: 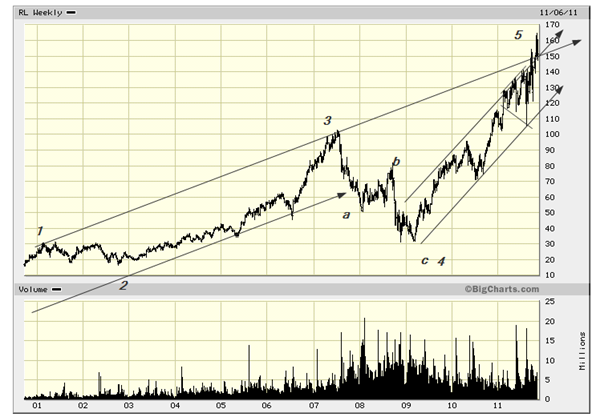 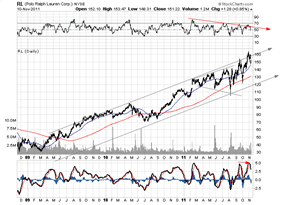 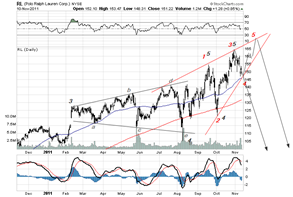 From big to small. The big picture is telling, there is no overlap of waves 4 and 2, they almost touch at about $30. Wave 4 is a text-book a-b-c, where the c = a. Wave 5 has a “throw-over” , that is it moves beyond the upper channel trend-line.

Mid-term the stock channels well, even if the count is not completely clear. It could have a series of 1-2’s at the start and hence should have a similar series of 4-5’s at the end. Even without that it is relatively easy to construct a 5-wave sequence up.

The short-term chart is the most ambiguous. The best count would be a wave 4 expanding triangle (a.k.a a megaphone), followed by said 4-5’s. Alternatively a wedge is forming that would allow for one more minor 5th wave that should itself unfold as a 3-wave structure. This could , repeat could, take the stock to about $170.

Either way the next big move is down to about $105 (4th wave of previous degree or base of wedge). After that possibly to wave 4 of the entire thing (at $30). It might get increasingly difficult to get that game going as more and more players lose their shirt. This is definitely a short, either now or at $170 if you want to play it safe.