Late last week BNS reported annual earnings of $5.27 bln., an increase of 21% over the previous year. The same day Royal reported an annual gain of $4.85 bln. down from the previous year’s $5.22 bln. (about –7%). To be fair they had a large single  charge for abandoning certain US activities that did not work out that well. BNS, on the other hand, had expanded it’s international network in Uruguay that did contribute to the banks international earnings. So, logically, BNS is down and RY is up. Here are the charts; 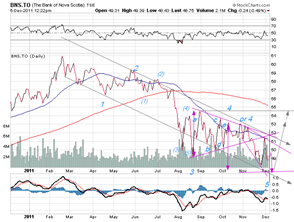 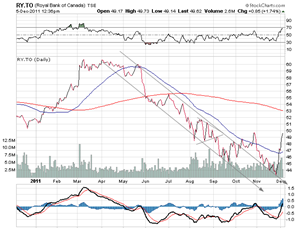 RY, as expected, has been moving up even in advance of the reported earnings and is now up almost $7 from the lows of $43+ and may even move another dollar or two even if we would not press our luck too much. The BNS is going the other way and is now within pennies of it’s lows of $48+ (both stocks come from identical highs of $61+, so the Royal had a little catching up to do) Vital statistics (from Bigchart) have the Royal earning a dividend yield of 4.37% and having a p/e of 12.348. BNS’ numbers are 4.27% and 10.9276

If you are a big player and have a broker that does these things, a market-neutral spread trade would be appropriate here ; sell RY and buy BNS in equal amounts and wait. For more normal investors just buy BNS. It’s chart has a pretty distinct triangle in it, even if one can argue where exactly the thing starts or ends and typically the stock will trade back to the level of the apex ($52), but more often than not to the highest point ($54). The best result (on the spread) would be obtained if both stocks traded back up to their 200 day moving averages, for BNS at $55 and RY at $53 ( a gain of $3 to $4)

BNS may, repeat may, be in an expanding wedge pattern which would explain the overlap. It requires one more low below $48 and should then trade back up to it’s origins of $53.5. This should happen rather rapidly. Here is a picture. 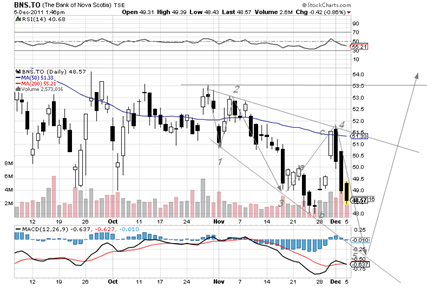