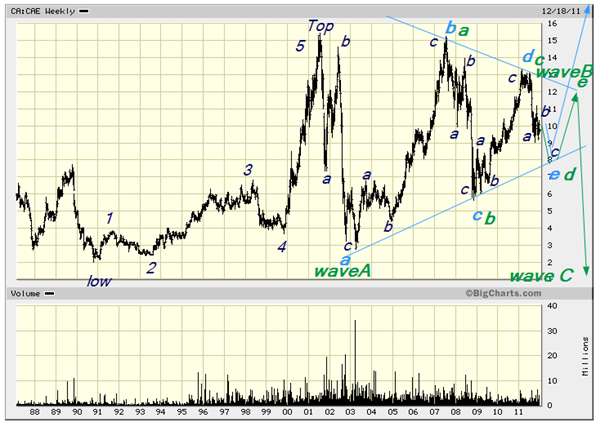 CAE Inc, the makers of flight simulators, provide a very nice example of triangles. To be a triangle there must be at least 5 legs that can, individually, be subdivided in three waves as in an a-b-c. The normal labelling is a-b-c-d-e. Each leg may not trade beyond the extremities of the previous one and the boundary lines must converge (only one can be horizontal). Triangles occur in either the wave 4 position in an ongoing sequence of waves, or in the B position in a corrective a-b-c.

Whatever the count, in the above chart it is near impossible to argue that the triangle is in a wave 4 position due to overlap. Therefore the light blue scenario is very likely incorrect. Assuming then that the green scenario is correct, or at least more plausible, we clearly are still missing part of d and all of e (if there is a triangle to begin with!). Normally the legs relate to each other, alternatively, by a fraction of 0.618 which they do. The e leg can, and often is shorter.  In more detail we get; 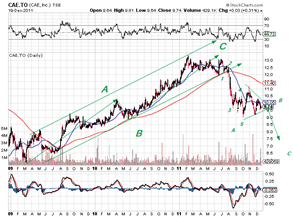 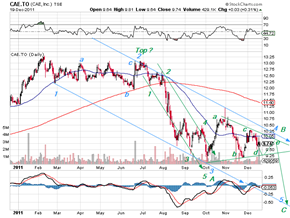 In the 3 year chart we put the top at the second top simple because of the perfect symmetry, but because of the ambiguity we will look at both possibilities. Suffice it to say that this 3-year up leg can be subdivided in 3 separate waves. Looking at the short-term chart, it can be enlarged by clicking on it, another, much smaller , triangle seems to be in the making.  Again it has to be a wave 4 (blue) or a wave B (green). However it will go down in both cases,  to about $7.75 if the large triangle is operational,to finish d and start on wave e. If it continues down the whole triangle concept is out the door and you are in wave 3 of C that started at $15 in 2007 and should take the stock down to $3 or lower directly..