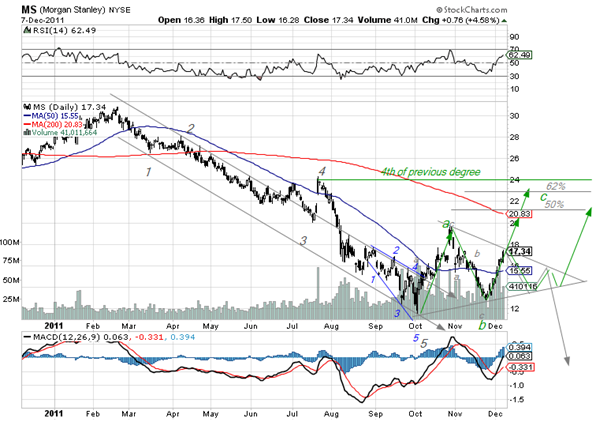 See our previous blogs on this one.

We tried buying at the lows but missed that opportunity. We got close to that point a second time but did not pay much attention. Now there are 2 possibilities. We are making a triangle and will drop like a stone, or we are still in a large “flat”and still have a ways to go to the upside. In my view the first possibility is highly unlikely as it looks like 5 waves were complete and you are so close to rock bottom that plunging now does not make much sense. So I will definitely go for the bull side but do use a stop-loss limit around $13.

A third possibility is that we do actually get a triangle but as a b-wave, that would delay the upward move but would not change the target all that much. By the way, GS is pretty well identical but at a much higher level, so more risky.

Morgan Stanley is, of course, an offspring of the house of JP Moran and Glass-Steagall, one could not possible hope for a better parent than what was then virtually (in the old sense) the Central Bank of the USA. As mentioned earlier, even Bear Sterns ultimately went for $10.