Back in March we thought this was a good sell (see previous blogs). It followed the script perfectly. Just the other day the company announced that profits would essentially drop by half as the result of flooding in Thailand that reduced the sales of cars by about 250,000 units and by the strength of the Yen which the company says must be above 90 against the US dollar to stay profitable. 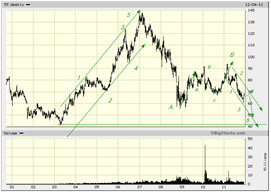 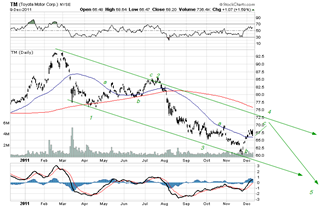 The stock should move below $40. It is not exactly clear how it will do this but at this time it looks like the stock is forming an irregular flat wave 4. It may not go above $75 or that scenario would be negated. This is actually a nice trade as you only have $7 or so to the upside and at least 4x as much to the downside.