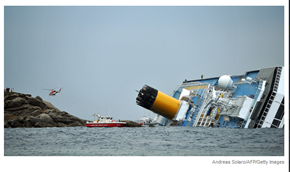 Three weeks ago we suggested that this stock was a sell. No analyst agreed , of course, as is clear from the above insert. The reason was primarily economic having to do with the enormous capital investments to keep these things going. But there was also a dormant concern about the seaworthiness of these machines, this one (and two sister ships) is about twice the size of the Titanic that sank exactly 100 years ago. This time, as then, both ships met their end as a result of human error, a bit of bravado perhaps?

Concerning the stock, after the initial dip of 20% or so the stock could do just fine regardless of what has happened. The company earns 2.5 bln a year and uninsured damages from this event are not expected to be more than a few hundred million. But that is not necessarily all of it. A look at a similar event concerning the Andrea Doria suggests these events can be industry changing. In 1956 this very luxurious trans-Atlantic liner sank after a collision with the Stockholm in a fogbank of New York. That essentially ended the trans Atlantic passenger business which was ceded to the airlines. Ships like the United States, Ile de France etc. etc quickly became obsolete. Perhaps the cruise industry will survive this without any problem but we suspect that touring the islands on a 130,000 ton floating hotel that is inherently unstable is not the way of the future.