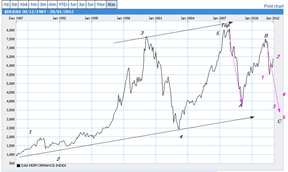 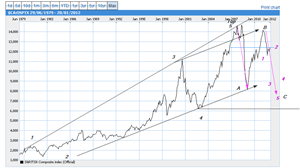 Here are the DAX and the TSX. Germany and Canada have vastly different economies but clearly the correlation is quite high. The DAX goes from a low of 1000 to a high 0f 8000, the TSX from just under 2000 to about 15000, proportionately the exact same amount. The Euro, Germany’s currency went from the 80-ties to 130-ties over roughly the same time period. The Can. dollar from 62 cents to 1 dollar; again both by about the same amount.  Both indices regained a very large proportion (near 80%) of what was lost in the great recession. Both did so in fairly clear B-waves. Both abruptly dropped sharply during last years summer, stopping at about the “pause”level of the B-wave. 4-5 months have gone by in what is clearly a wave 2 counter-trend rally. The next move is down hard in wave 3. Be prepared!

In EW terms I would assume that the tops occurred at the actual high points, in 2007/8. The action from that point on is a large “flat” A-B-C. The “normal”target for any correction is the 4th wave of previous degree. Neither the DAX of the TSX have done that yet. They should. Those levels are roughly 2500 for the DAX and 6000 for the TSX. Similar levels can be arrived at if you like the Head & Shoulder approach.

This is a huge top. It is taking so long because every time the bears get the upper hand another trillion or so in stimulus is frown at the problem, either from the US, the ECB or China. Investors are so ingrained with this Pavlov philosophy  of buying the dips, that they cannot imagine such an outcome. I am a member of an investment club consisting of about 25 reasonable smart people. My views, even when expressed delicately, are considered something akin to the mutterings of the village idiot. Only one other member believes the market might go down. There are no bears and that might just be the problem.