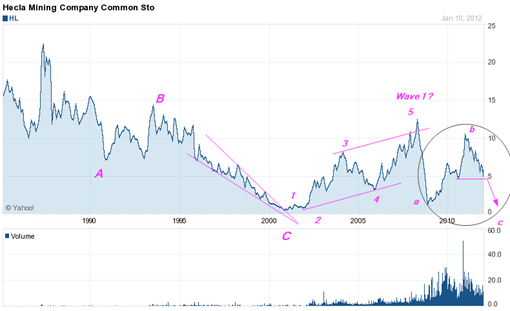 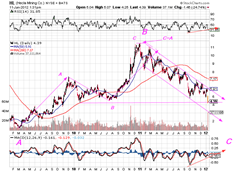 See also previous blogs that more or less anticipated today’s events. The top chart gives the big picture. It was a screaming buy at under $1 back in 2001 – on account of the multi year wedge that ended then – when it started of gaining by a multiple of 8x in a matter of years. In 2009 it crashed like everything else but then regained its composure in what was undoubtedly a B-wave. The implication is that the stock should ultimately make a new  low. The first stop , as almost always, the level of the b wave in the  larger B-wave. In this case just above $4  which we did today.  Obviously this stock is not a buy for a long term hold, but it may be for a quick trade. If you are so inclined it could bounce a few dollars, perhaps even to about $7 before resuming the down trend. Percentage wise that would be a great trade but also a little risky.

The cause of this problem is that authorities have shut the mine down as a result of accidents caused by rubble in the shafts. Supposedly it will take a year to clean it up. Almost 300 people work here and this is a very old mine,if not the oldest one (Coeur d’Alene  is just up the road). If it lives up to it’s name, “Lucky Friday”, things might be resolved a lot faster providing a good backdrop to a bounce. My guess is that we are in a 5th wave now that should not go beyond $3, but not at all sure it will go that far now.

The mine has gone 25 years without a fatal accident and the owners are determined to reopen it as soon as possible. Coeur d’Alene (CDE NY ,CDM TO) has not been affected recently but has somewhat underperformed HL

Below is  day chart. It is little more than a wild guess;