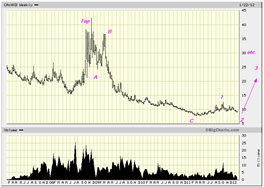 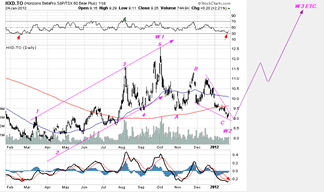 Should the market go down, as we certainly expect that it will , perhaps even by a lot more than most people can imagine, owning some of the HXD might just be the best remedy. Unlike commodity based ETF’s (like HNU for Natural Gas) that are usually in contango (near contract cheaper than later contracts), this one does not suffer from the inevitable loss on roll-over as it is calculated on the index itself. The 2X leverage should be a bonus provided you deal with it properly; you want $100 “protection” you buy $50.

During the counter-trend B-wave rally in which  the stock market lost about 50%, this HXD went from roughly $40 to $8, losing about 80%. $8 seems to be the  the extreme for both the HXD and it’s mirror ETF, the HXU, see below. Looking at the short-term chart it appears that we have had a first wave up from $8 to $12(about 50%), coinciding perfectly with the autumn drop last year of about 25%. This thing tracks reasonable well and it is less sensitive to the downside than the upside (this is a simple mathematical outcome). The next big move should be wave 3 up , as the market goes down, also in a 3d wave. 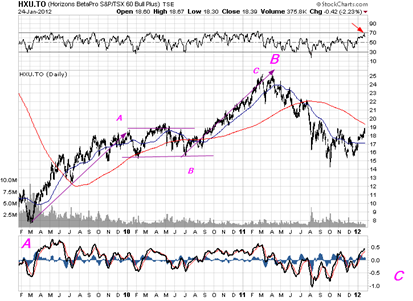 The HXU is the inverse of the HXD. It therefore gives you a good example of what happens when markets go down, by looking at what happened when they went up. Very roughly speaking the index went up 80%  from the March 2009 lows to the April 2011 highs. The HXU went from $8 to $25 or 200+%. This is exactly what should happen to the HXD when this market goes down. In terms of defensive strategies this beats cash any time as it does have a return!, but obviously it is predicated on the outlook being correct, or at least not incorrect.

There are many other ETF’s that are equally effective. The HSD does the exact same thing using the S&P 500 instead of the TSX60. No foreign exchange is involved as it is priced in Can $$. There are too many to list. Below are charts for the HSD and HSU; 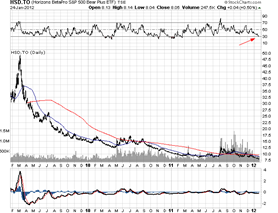 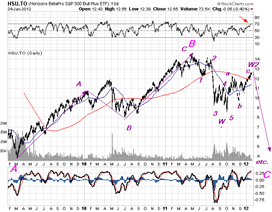