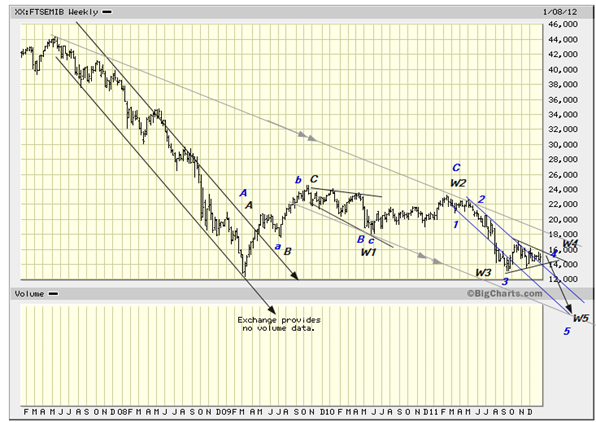 The MBI index for Italy has been trading at around 15000 for the past half year. That is down by roughly 2/3 from the all time highs. Compared to most other country indices , that are down, give or take , 10/20% that is pretty awful for starters. And now S&P has decided to downgrade the country by two notches. As meaningless as these ratings have always been, no doubt there will be a marginal negative effect. Tentatively we could come up with two different EW counts. The one in black which suggests that the Italian index has been on the way down since late 2009 , and the one in the blue, which conforms more readily with the rest of the world, and where the drop starts in early 2011.  In both cases we could have been in a triangle, or at least a consolidation pattern, for the past half year; 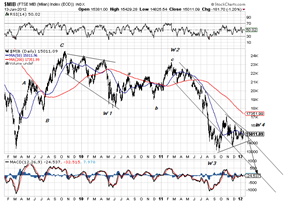 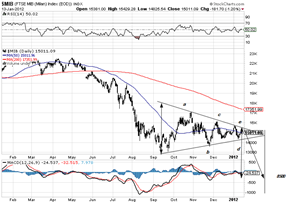 Again, as is almost always the case, there are a few technical shortcomings to the triangle concept (which we will not go into), but that it is a consolidation pattern of sorts is beyond any doubt. Ergo we would expect the next move to be down. A reasonable target would be around 8500. “La Dolce Vita” may, after fifty years and some, be coming to an end. Certainly the average portfolio will be decimated, down by 80%+.