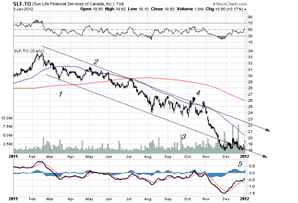 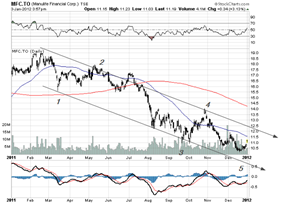 Manulife has been the worst performer for most of last year, except for the last leg down. Sun drops below the channel line and Manu cannot even get there. For this reason I think the orthodox low for Sun was not the early December low but the late December low. The leg down during that month is a 5-wave move. Consequently it can be argued that Sun only just started its correction and should have more to go. $22 is quite possible and perhaps even $25 even if I would not hold out for that.