We have had an $8 target for this stock for quite some time (see previous blogs). That target may turn out to be just a little bit too low for now. Here are the charts again; 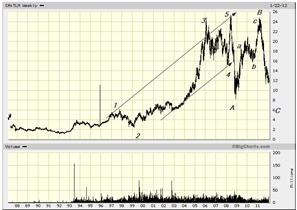 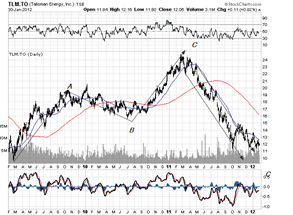 The 4 year flat pattern does suggest $8 or thereabouts. However a trend-line connecting the lows would presently run a little higher, more like $10. I cannot get stockcharts for more than 3 years and consequently the A-B-C shown missis the real low in late 2008, but the picture is nevertheless pretty clear. The count for the down-leg not entirely. 5 waves could already be complete and we are now in a b wave to be followed (at the very least) by a c up to around $15. Looking closely at that last leg, it could also be a diagonal 5th with much the same results; 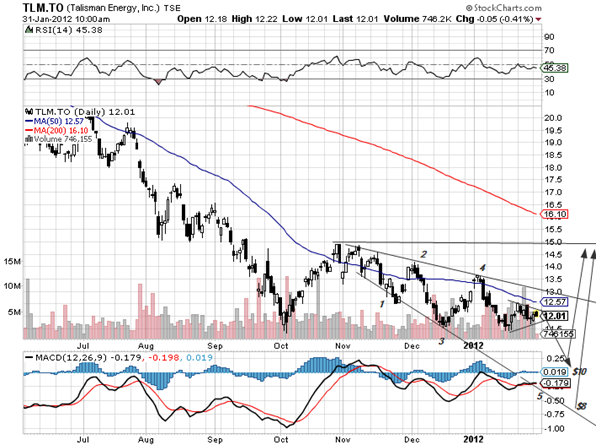 You can buy the stock now in the knowledge that it should go to $15 either way. Or you can chose to be patient and wait for it to drop to $10, perhaps even $8 and then watch it go to $15. Obviously you run the risk of missing the proverbial boat. The stock has a book value of about $10 and is down 50% this year. It has a beta of 1.5 so it listens mostly to its own drummer. Suppose that you do buy now at $12 and the stock drops to $8. By that time it will have dropped about $16 in a single move. Typically a rebound would then take it up about 38%, or $6 which would still leave you with a gain of $2 or about 16%. Pick your own poison.