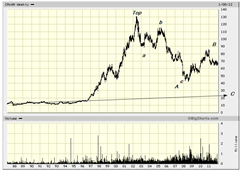 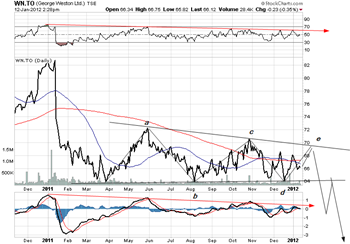 Ad nauseam?  I have included the big chart just to show the range that this stock has gone through over the past 15 years. The move from $10 to $140 was , of course, absolutely normal and the way markets are supposed to work. The next $100 drop was an absolute calamity  for which there was no ready explanation, despite the rather obvious fact that the rise was much steeper than the drop. Perhaps it was Wallmart’s entry into Canada.

It regains it’s composure by roughly doubling in what is a fairly clear B-wave. Then even before Europe almost blows up the stock loses 1/2 of its value in next to no time. From that point on it has been working on the longest triangle of them all.  For ten months now it has higher lows and lower highs and probable has a few dollars to the upside before completing the required 5 leg sequence. Given its size, this is probable not a 4th wave triangle but a B-wave triangle. Alternatively it is a series of 1-2s masquerading as a triangle. The important thing is to know that “consolidation patterns” are continuation patterns, you keep going in the same direction.

In this case , that is down. We would sell now.