Back in October 13th  of last year , I expected Cat. to have at least one more leg down before a sizeable rebound, but I did provide an alternative should this not happen. I thought that to be a low probability event but as it turned out it was the alternative count that was operative. For that alternative count I had an upper target of about $105 after a fairly fast zig-zag back up would be complete. Here is the chart; 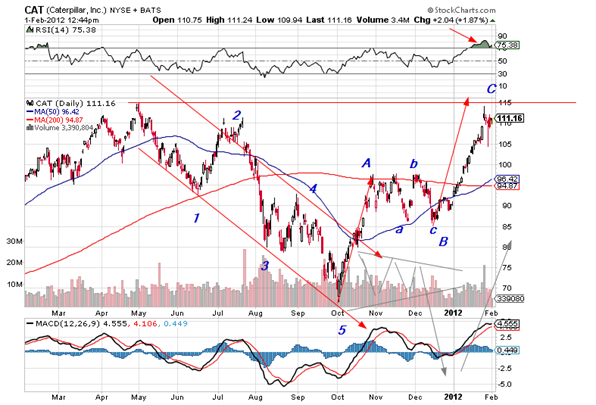 The light black indicate the expectation at that time. The alternate is what actually happened. It is a perfect zig-zag that went beyond $105, and is just shy of a new high. If you enjoy conspiracy theories,  it is good to know that Cat contributed 34% of the Dow’s 3% gain for the first month of 2012. Bank of America, which was up 28% during that month, and with that the best performer, did not even get close. The reason is that the Dow is a price-weighted, and not a capitalization-weighted index, consequently CAT has 15X the weight of a BAC, IBM 27x. Anyone wanting to push the DOW up would not be bothered with BAC, or over one half of the stocks in the DOW that trade under $50, instead by concentrating on the two most influential stocks, IBM and CAT, you get a much bigger bang for your buck.

To date CAT has followed EW principles to a tee, even if not the pattern I thought most likely. Now that we are here the stock should come down immediately. If it does not, I will do a follow up. Below is the big picture; 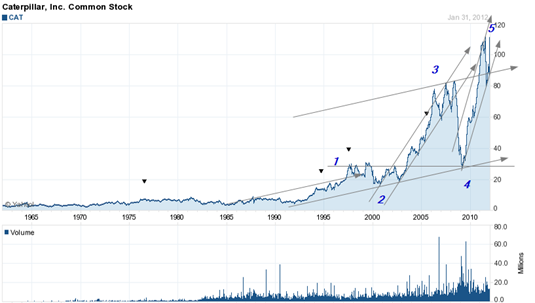 There appears to be a slight overlap between waves 4 and 2, which would favor the idea that the wave 5 leg up is actually a B-wave. Whatever. The main point is that if you own this , or are thinking of buying it, you must be an ardent believer in the buy high, sell higher approach to investing.