As the Dow Jones looks like it may break through a critical level today on the job numbers, that other Dow still supports the big picture outlook. Here are the charts; 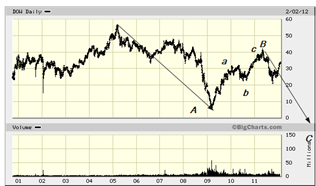 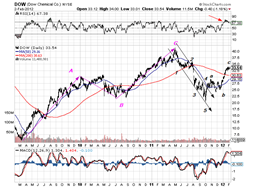 The pattern is essentially the same as that of  hundreds of other stocks, a first wave down (A) followed by a very clear B-wave up and now the C. Wave 1 down and an a-b-c up are now pretty well complete, see detail below. 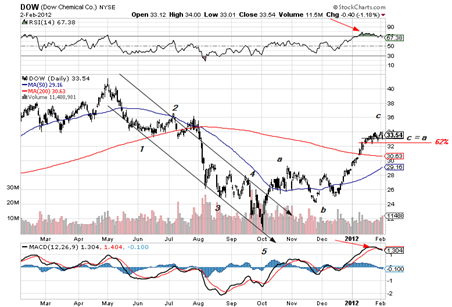 Anything is possible so this leg up could still develop into something bigger and higher but going by the present evidence this would be highly unlikely. Both the 5 waves down of wave 1 and the a-b-c up are unmistakable. Also this fits the bigger charts perfectly. The rebound has been a little over 62% and  very close to where c=a. The RSI is at nose-bleed levels and deteriorating AND the MACD is in a similar position. The 5th minor wave of c may be a wedge with perhaps another dollar to the upside but that should be about it.

Fundamentally the stock is expensive at close to 14X p/e, but a yield of 2.8% still compares well to that of 10-year govies. But who cares. This stock is about to dive back down.