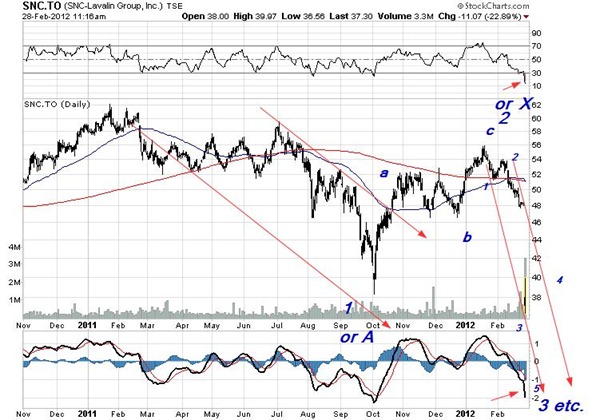 See previous blogs! We were wrong about wave 2 not going above $52, it did but at least we got the first target just about dead on at $40 or so. The move down is not entirely clear, it could be 5 waves but there is some overlap which should not be there. However the a-b-c back up, even if surprisingly strong is pretty clear. Today we are doing the 3rd of 3 (or alternatively a second a-b-c down). The crime today seems to be accounting irregularities, cozy relations with a former political friend and a lot of “baksheesh” that is pretty rampant as soon as you get below the Rhine, but that can be found here too as, for instance, at that  Canadian ex-crown corporations like Orange.

These guys are building jails in Lybia, something that is presently in high demand with our present government that would like to see us follow the US example by having the largest percentage of the population behind bars. That is not going to stop this stock from reaching our ultimate target of below $26.

Richie Brothers, the auctioneers (RBA) have a similar chart except that wave 2 peaks at a more modest 60% or so retracement level (see previous blogs).