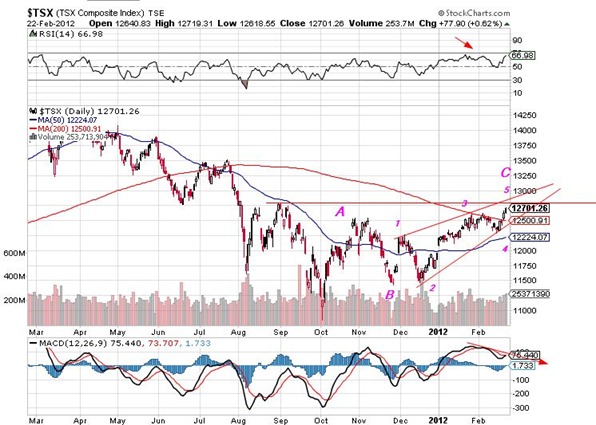 Just a quick update for the TSX. The TSX hit an interim high late October last year at about 12500. From that point in time it has spent 4 agonizing months seemingly going up everyday on Greece’s yes-no default comedy which is now getting the icing on the cake by way of the rather innocent sounding retroactive “collective action clause” which is essentially no different than the, in maritime circles, well accepted “general average” law. Over these four months the TSX has gained a grand total of 200 points and now sits just above the 62%. It has gone up in a  fairly clear a-b-c in which the c-wave is a wedge or rising flag. It could be complete or add a little more to get to the wave 4 of previous degree level to finish wave 2. Then wave 3 down should start. On this index there is no compelling reason to change the outlook!