“Shadow Government Statistics” is a great web site  that makes it it’s business to calculate various government statistics in a way that they believe is more accurate or appropriate. Often this involves going back in time and using methods that were used in the past; arguable this leads to a better presentation of the numbers. This is what they posted today for unemployment; 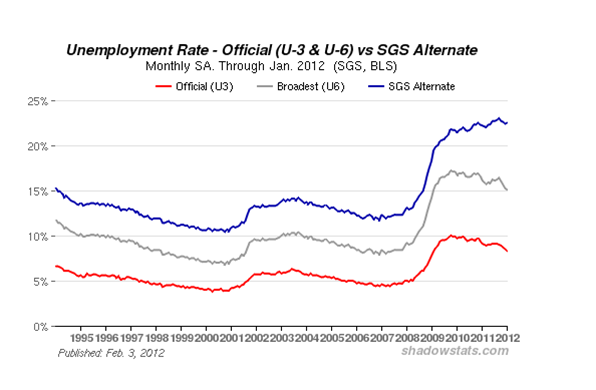 The explanation is given as follows;

SGS stands for “Shadow Government Statistics”. The one that all the fuss today was about is the one in red. The one above that (in grey) is reported publically as well but is down played by the media. The real unemployment rate, according to the authors of this website is the blue one, at the top. It is more in line with unemployment rates all over the world. In case it is not entirely clear what a discouraged worker is , here is the definition;

In Canada if you are unemployed AND collecting EI (Employment Insurance) you are required to report every two weeks that you are still available to work. No questions are asked with respect to what you might have done in order to obtain work. After EI stops, usually quite soon and that is assuming that you get it in the first place, no reporting whatsoever occurs. How they do it in the US I have no idea but if for statistical reasons you can exclude anyone who has not stated an intent to look for just 4 weeks, than clearly the result becomes almost meaningless. When adjusted for this factor (the blue line) unemployment has actually increased on balance for the past 2 years, and is running above 22%.

As the US has the highest level of incarceration of any country in the world and growing, and as most other countries are less than 1/4 of that, one could further argue that, provided a reasonable proportion of those in jail would be unemployed if they were not (I have no idea if this is true!) unemployment might even be a little higher. 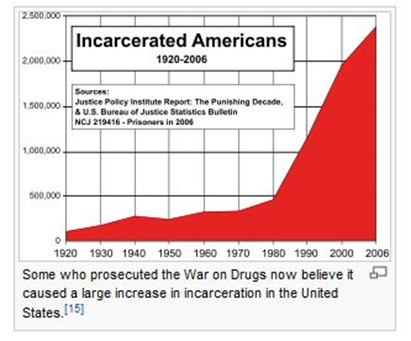 Most European countries run at incarceration rates that are about 1/10 of those in America. When making  a comparison perhaps some adjustment should be made.